Thwarted and Unthwarted Histories: Sound archaeology, and a digression on a Neoist curator This blog has a recurring theme of 'failed histories', i.e., forgotten stories that hang by the tiniest of threads discoverable only by meticulous scrounging.  Last week I gave a talk covering some of these - 'Thwarted Histories of Electronic Music' - at a salon in Copenhagen organised by The Institute for Danish Sound Archaeology / Institut for Dansk Lydarkaeologi as part of the Gong Tomorrow festival.  'Thwarted histories' was chosen as a title instead of 'failed histories' to provide increased melodrama; 'thwarted' suggests an antagonist...  some sort of external force that acts to condemn things to obscurity.  Maybe this force is traditionalism?  Or prejudice?  Or apathy? 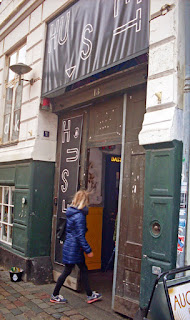 Whatever the thwarting agency may be, the Institut for Dansk Lydarkaeologi (aka IDL) situate themselves in opposition to it.  IDL are dedicated to reviving the legacies of early sonic experimenters whose activities have been neglected (they'll be presenting their researches at Cafe Oto on the 28th November).  IDL's Copenhagen salon was held at the uppermost floor of Huset-KBH, a large old venue with the forthrightly-named 'Bastard Cafe' on the ground floor - the entire place exudes a cyberpunky warmth, or 'hygge'.  Tantalising Danish-language talks included composer Carl Bergstrøm-Nielsen on his work with the Gruppen for Alternativ Musik, singer-songwriter Marie Eline Hansen performing fully-conceived reconstructions of obscure pieces originally by Lene Adler Petersen and Henning Christiansen.  Also, IDL's Jonas Olesen presented his intensive researches into acoustical engineer/therapist Christian A. Volf's electronic sound activities stretching back to the 1930s.  Chatting afterwards, Olesen described his excavations into uncharted archaeological strata - it reminded me that the most tenacious historians are often the ones working independently of academia.  Other IDL members Rasmus, Magnus, and Mikkel spoke on the current culture of reissuing rare, out-of-print material (IDL are also a label).

IDL also diffused the 1978 four-channel Bent Lorentzen work Visions (IDL are about to reissue his electronic works).  Bent Lorentzen is a Danish composer who would perhaps be better-known to the English-speaking musical world if only his promised book 'The New Music Theory' had appeared.  Until this salon, my only knowledge of Bent Lorentzen was of this unobtainable unicorn.  Lorentzen's nonexistent 'New Music Theory' is cited by British electronic composer Daphne Oram in her idiosyncratic 1972 work 'An Individual Note of Music, Sound and Electronics' as dealing with "acoustics, electronics and the psychology of music" and, according to Oram, will "soon appear in English" published by J. & W. Chester Ltd.  Lorentzen's publication seems to have been 'thwarted' for unclear reasons. 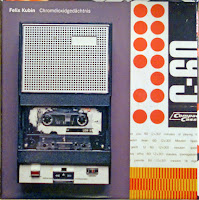 Two other English-language talks at the IDL salon were illuminating regarding the dynamics of research/sound-archaeology and information dissemination: Felix Kubin gave a poignant, entertaining presentation on the perverseness of the cassette medium and Germany's cassette culture, developed under the spectre of cold war nuclear annihilation (as also detailed in Kubin's Chromdioxidgedächtnis CD+tape artefact on Gagarin Records), and earlier in the evening, following on from IDL's discussion on reissue culture, sound archivist Andrea Zarza Canova was interviewed by IDL's Jan Høgh Stricker about her Mana Records label she co-founded in 2017 (releasing both old and new works: Benedict Drew's abstract electronic protest music Crawling Through Tory Slime is a modern favourite). 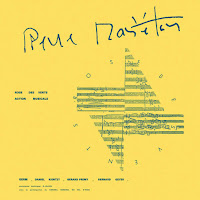 Andrea Zarza Canova's descriptions of her early navigations in experimental music were refreshingly evocative.  She explained that several years ago, she'd regularly visit the online repository for avant-garde music, UbuWeb, where one user named 'Continuo' showcased offbeat and rare materials that resonated with her interests.  Over time, Zarza Canova struck up a correspondence with this uploader, who turned out to be a French collector, which led to the first Mana Records release: a reissue of Pierre Mariétan's rare 1987 urban soundscape composition Rose des vents.  The French collector assisted in establishing contact with the original composer, and so a vanished artefact was able to re-materialise as an artefact once again.

Collectors and archivists provide lifelines to imperilled musics on the brink of oblivion.  Zarza Canova's story gave me flashbacks of my pre-YouTube mp3-trading adventures in online IRC chatrooms, or file-sharing service Napster in the mid-2000s... and negotiating with certain users in possession of untold rarities.  This was a rite of passage for a certain generation.  I had often wondered who these esteemed users were - what were their stories?  How did they obtain these rare recordings?  I had the impression that they must've been associated with the artists, or possibly were the artists themselves.  They were loath to chat.  I remember one whose upload speed was only ~10kB per minute: a cause for much distress, since the user had the apparent entirety of cassette releases from It's War Boys - post-punk label I coveted.  "Patience" he urged me.

This blogpost is getting nostalgic.  To counteract this, I should present a present-day wonder: a digression on a collector/uploader operating today...  There is a YouTube user who curates one of the most extraordinary experimental audio collections available online: 'celestialrailroad', who began uploading in 2012.  Much of this channel's content makes the It's War Boys label look like Parlophone.  In 2017, celestialrailroad was almost derailed by the Arts Council-funded Lux organisation making heavy-handed copyright strikes against the channel, temporarily disabling all its content.  I intuited that after this near-calamity celestialrailroad reached even deeper underground towards more wayward things still.  The channel's breadth is extensive - there are It's War Boys relics of course, along with big name experimentalists such as Walter Marchetti, Bob Cobbing, Ian Breakwell, etc., but there are gobsmacking obscurities too; one-off slices of life such as found audio cassette journals, or recordings of aeroplane shows.  Whoever is behind celestialrailroad has a finely-tuned sense of what's what...  A sense of the 'pre-internet perverse' - a sort of authentic, jolting waywardness: off-grid activities somewhere between the definition of 'art' and 'a cause for concern', like something coming through your letterbox in the dead of night wrapped in tinfoil.  Sumptuous grit... (if this makes any sense). 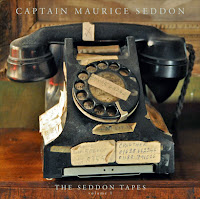 As with the online IRC and Napster archivists of yore, I began to wonder about the character behind the collection.  In February 2018 celestialrailroad uploaded one of the taped phone calls of Captain Maurice Seddon (Royal Signals, retired) from The Seddon Tapes Volume I (on Paradigm Discs).  I'd worked on the audio segues on this LP with William English, the custodian of the Seddon archives (Seddon was the inventor of heated clothing).  English and I vaguely theorised that the head of Paradigm Discs, Clive Graham, could be celestialrailroad.  After talking to Graham at The Wire magazine's Xmas party in 2018, he denied this, but the plot thickened: he too was curious about the channel's mastermind and had been able to discover that it was run by somebody called Wirb Neug, who also had another YouTube channel of the same name, and a Facebook page.

This new information simply raised more questions.  Wirb Neug's Facebook revealed interests in spoken word and rare poetry ephemera, particularly Bob Cobbing's Writers Forum and its milieu, and also the work of provocative playwright Edward Bond.  Among this were status updates on things such as smells emitted by co-workers, photos of a clothes hanger, a re-posting of an old memory about being woken by the sound of a neighbour vomiting.  It was all fascinating.  Many references went over my head.  Further investigations seemed futile - Wirb Neug/celestialrailroad seems to be ensconced in the traditions of Neoism: exactnesses evaporate.  Mirages abound.  Poetry is everywhere.  The following oblique bundle of facts may illustrate the potential complexity: The Celestial Railroad is a modernist piano piece by Charles Ives, based on a short work of fiction by Nathaniel Hawthorne, which is itself presented as a dream, which constitutes a parody of Bunyan's Pilgrim's Progress, which is, in turn, an allegory.  The channel takes its name from this.

I had pondered whether celestialrailroad could be more than one person, especially as there's one exchange on Wirb Neug's Instagram where a user assuming Wirb to be the creator of a post's content (a Graf Haufen/Karsten Rodemann nugget) receives a reply where Wirb claims to be "a young Croatian woman" living in Berlin.  This is plausible.  But one day, in May 2019, a live video was uploaded (quite uncharacteristic of celestialrailroad)...  It was a Cafe Oto gig with Akio Suzuki, Aki Onda and David Toop, where I just happened to be present.  I remember noticing the person filming, sitting directly opposite me at the other end of the room - and it was neither Graf Haufen nor a young woman, but a youngish man with glasses, probably in his 30s, which jarred with my imagined vision of celestialrailroad as being of an older generation (I believe there are generational boundaries inhibiting acquisition of certain rare materials for specific age-groups - this is observable somewhat in the antiquarian book world, but I digress).  Was this Wirb Neug?  The obsession was nearing an answer...

My Oscillatorial Binnage bandmate Toby Clarkson was in attendance at that Oto gig too, seated beside me.  I asked him to scrutinise all the photos he'd taken that evening, but alas, as an experimental photographer, his leftfield sensibilities compelled him to document only the floor of the venue.  The best photo he obtained merely shows Akio Suzuki's legs as he reaches into his box of soundmaking tools.  The photo is a few hundred pixels shy of capturing celestialrailroad's shoes at the upper right-hand corner.  See below: 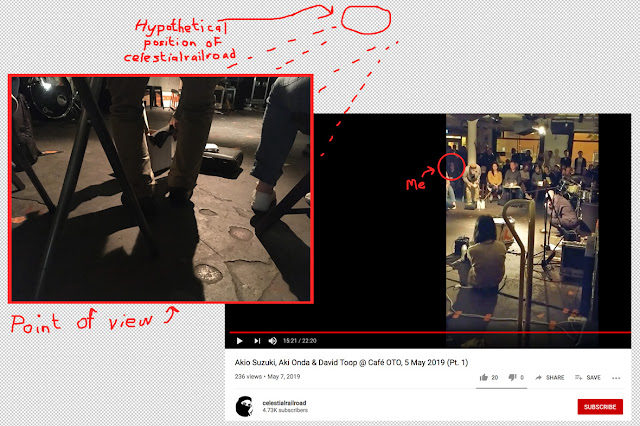 Additional contemplation at this time leads to the conclusion that further evidence remains unknown and may remain so.

Appreciate the sonic rescuings of celestialrailroad and Wirb Neug on YouTube.
Posted by Daniel R Wilson at 17:13