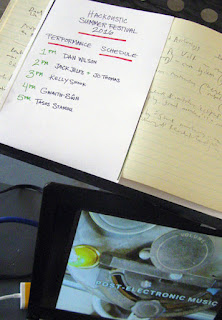 Yesterday I had the unexpected honour of giving the first presentation at the first ever Hackoustic Festival at the Machines Room, Hackney.  Prestigious as it sounds, this scheduling was a rather a chance outcome of other performers dropping out at the last-minute.  Nevertheless, it was a privilege to present an overview of my work there and it seemed to resonate perfectly with the Hackoustic theme.  I spoke about post-electronic music - something I've been steeped in since an epiphanic acoustic experience on a train in 2004.  Post-electronic music has its pros and cons: miraculous agitations are possible (that is, emergent sonic effects), but the instrumentation is often cumbersome and difficult to transport.  Inspiringly, some other Hackoustic performers had collapsible instruments: a very useful feature indeed, and something that should always be factored into apparatus-building at the planning stage (but which is easier said than done when working with found objects).

My presentation was prefaced with a preamble on the value of electromagnetic feedback force-fields in the resonating of objects.  Through the use of electromagnetic relay coils (akin to large EBows), it is possible to establish the elusive element of sustain in the Attack-Decay-Sustain-Release post-electronic system.  Attack, decay and release are all qualities achievable physically, but the sustain parameter - achievable with electromagnetism - completes the electronic / acoustic envelope control analogy.  Crucially, it allows physical waveshaping operations to be performed.  The summation of many years of these electromagnetic post-electronic experiments can be heard on the upcoming Oscillatorial Binnage album Oscillations: Post-Electronic Music (which should finally be released this year), featuring myself, Fari Bradley, Toby Clarkson and Chris Weaver performing on post-electronic electromagnetic assemblies (which actually tended to couple acoustically through the table to become a single super-instrument). 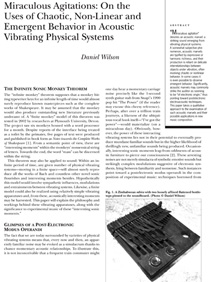 Somebody asked where further information on post-electronic music can be found, so the main purpose of this blogpost is to provide links to these two newly-uploaded papers: 'Miraculous Agitations: On the Uses of Chaotic, Non-Linear and Emergent Behaviour in Acoustic Vibrating Physical Systems' and the shorter 'Dumpster Diving and Post-Electronic Soundmaking' (originally published in the 2012 and 2014 Leonardo Music Journal respectively).  The former may serve as a primer or manifesto on the technique.  Both were written at a time when access to workbenches came easily - alas, it is all too easy to take such spaces for granted, as I'm currently in more cramped conditions.  Space is the major issue in the construction and recording of physical instruments.  Most of the aforementioned Oscillatorial Binnage album material was recorded at the wonderful Borde Basse studio in Southern France where we were spoilt for choice with vastnesses of space (hauling the stuff there was our necessary endurance for this luxury).  And so spaces such as the Music Hackspace (to which the Hackoustic Festival is attached) and its satellite workshops must be cherished.  Such spaces are the stronghold for acoustic experimentation in a digital world...

Posted by Daniel R Wilson at 10:52 No comments: