I've recently been editing a 2010 Oscillatorial Binnage performance of a piece titled 'Variations for Rooms and a Tone'.  It features multiple strands of acoustic microphone feedback steered by injections of carefully pitched oscillator tones, and destabilised by various other subtle treatments.  The pitch of the feedback relates to the resonant frequency of the space(s).  Conceptually, it may not sound entirely original (it certainly owes some debt to Alvin Lucier who explored this terrain), but its originality lies principally in the choice of venue - every space having its own unique cluster of tones: a 'sonic fingerprint'.  This particular 2010 recording was performed at a soon-to-be-demolished former bus depot in Neckinger, known as the Woodmill.  It has unusual resonant cubbyholes allowing for many shifts of resonance.

The editing has been slow owing to an obligation to 'do justice' to the old space.  Further complications involve the removal of countless footsteps, which would have to be removed via individual crossfades.

The most fascinating microphone/speaker feedback tones occur when the feedback has not yet stabilised, i.e. when the feedback tone is still 'finding itself' after the soundsystem is turned on.  Transitions between conflicted resonances are also very musical.  Yet these moments do not last long, and a way to cleanly extend these moments without affecting quality and pitch is sought.

One notable program comes to the rescue in such situations - a wonderful high-powered timestretcher by Nasca Octavian Paul.  It is called PaulStretch, and most people may have already stumbled upon its fruits in the "800% slower" music stretches on Youtube.  Those who aren't yet acquainted with it are in for a treat - it allows for lusciously smooth timestretching (along with other treatments) and is specifically designed for long-duration stretches.  PaulStretch can extend a 15-second sound to one lasting over 475 billion years. 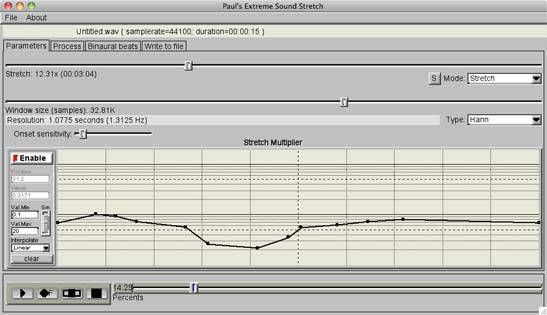 It has been used extensively on many unlikely sonics, such as Rick Astley and Justin Bieber hits, the late ‪Eduard Khil‬'s lyricless epic 'Я очень рад, ведь я, наконец, возвращаюсь домой' (aka Trololo), the Eastenders theme, and my own favourite, Jerry Goldsmith's theme to the 1990 film Total Recall.  What initially seem like exercises in trollsome ridiculousness play out as astonishing ethereal meditations.  The beauty of Paulstretch is in its sophisticated algorithm where percussion and drum noise - which would usually become discordant metallic barking in bog-standard timestretchers - are rendered as luscious crashing waves, in keeping with a percussive nature. 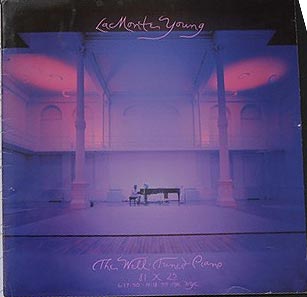 It is a curious experience to play old chiptunes, MOD music and Amiga game themes through Paulstretch.  8-bit tones retain their familiarity, yet become uncharacteristically epic in proportion.   Other interesting experiences may be had by playing pure intonation music in Paulstretch.  For example, some of the more complex moments of La Monte Young's 'Well Tuned Piano' - which itself is a long-duration piece of over six hours - become even more fascinating.  Some of the beat-frequency forming 'cloud' effects such as those heard on CD 4 of the 1992 Gramavision release benefit from Paulstretch treatment.  I won't post any examples here, but the software is free and there seems to be a world of potential.  One commentator asks "could this be the start of a new age of music?"   It certainly offers a new viewpoint which can be at times awing to the point of unnerving.

Such clean timestretching is extremely useful for elongating hyperinteresting short sounds, such as the elusive miraculous agitations, and various bookophone flourishes.

Nasca Octavian Paul has also programmed such excellences as the ZynAddSubFX soft-synth and the HyperMammut Fourier transform tool among other things...
Posted by Daniel R Wilson at 07:00 No comments: