I thought it worthwhile to start some episodic blogposts in a series titled "I Found a...".  Finding objects (and adapting them) is an enduring mainstay of 'miraculous agitations', post-electronic music, Oscillatorial Binnage performances, etc.  Losing objects is also a longstanding interest too, viz. the impish practice of randomly leaving cassettes or CD-Rs of jarring music in public.  Here however, the basic act of discovering objects and beholding the onrush of associations will be examined, without any necessarily musical/sonic objectives in mind.  This is the first episode... 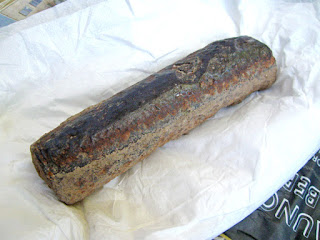 On the morning of the 25th September 2018 I was walking to the train station.  I tripped on something lying half-exposed on a gravel footpath leading to the station, sending me careering into a bench.  At the time, blogging about this was the last thing on my mind; I thanked the heavens that nobody was around to witness my freakish pratfall - embarrassing as it was.

The ground-embedded object that triggered this physical disarray (mercifully not causing any injury) demanded closer inspection.  It looked like a lump of natural iron ore, or possibly even a piece of valuable metal meteorite.  Nobody was around, so I kicked and prodded it until it loosened.  With a key, I was able to prise it from the footpath like a very low-rent and fiddly Excalibur.  Closer inspection revealed a seam at one end, indicating manmade origin, and it was interesting to see this iron pipe-like artefact - whatever it once was - half-way to becoming mineral again.  The exposed side was worn smooth (from years of people walking - or tripping - over it), whereas the underside had small stones or crystalline growths on its surface.  Both ends of it were solidly blocked with earth, making it quite heavy.

Whilst carrying it towards the station, its dirtying effect upon the hands became evident.  I was reluctant to discard it, as I enjoyed its half-manmade / half-mineral aspect, so I went into the station shop (which had a patisserie section) and asked for a tissue serviette.  The cashier said I'd have to buy some food first.  Inwardly I felt aggrieved, as this was known to be a somewhat bigoted means of denying destitutes access to serviettes, which, to the homeless, are essential for daily alluvials.  I lied and said, "I bought this chocolate bun earlier and forgot to take a serviette," then momentarily held up the rusty pipe above the counter.  The timing of this psychological dodge was crucial: if I'd held up the pipe in the wrong hand, or for a nanosecond too long, the cashier would've immediately recognised that it certainly wasn't a chocolate bun.  I was almost poised to sheepishly confess the truth: that I'd found something rusty and dearly wanted something to wrap it in.  Luckily the magic of suggestion worked wonders, and I obtained not one, but three serviettes without a hitch.  After arriving in London I wrapped it in a free Metro newspaper for good measure.

During the day I began to feel concerned about the pipe, mindful of unexploded World War II munitions, nuclear waste, and of the recent Salisbury incident with the found perfume bottle containing nerve agent.  The power of suggestion - which worked so marvellously with the earlier "chocolate bun" serviette request - was now working against me, as I seemed to feel slightly ill, so I resolved to carry my bag as far from my body as possible.  Maybe it's irresponsible to carry an unknown object in public?

Later, I went to the British Library.  They operate a bag check policy, and for a perilous moment it seemed that the mystery metal pipe might need to be explained.  I wouldn't be able to explain it.  The attendant prodded the newspaper+serviette swaddling but didn't comment upon it thankfully.

After eating I forgot about the pipe and felt more buoyant.  In the afternoon I met with a friend - who is something of an art connoisseur - at his apartment.  Remembering the pipe during a lull in conversation, it seemed logical to tell him the full story of the pipe.  He happened to have a plumber working on his premises, and he warned "don't tell any of this to the plumber, he'll think you're insane".  Of course I had no intention to.  I jokingly appealed my friend's dealerly expertise to put a valuation on the pipe, to which he punchlined without hesitation "two-hundred pounds".  Writing this now, this doesn't seem such an utterly absurd figure as it did at the time... (kind reader, feel free to make an offer).

The next day I re-examined the pipe and scraped its innards with an old screwdriver to discover its contents.  At one point it felt like it might contain coins - a flat silvery obstruction suggested it might be a tube full of antique sixpences, but it was just a stone.  Eventually the interior was cleaned of grit and mud to reveal a clear channel through it. 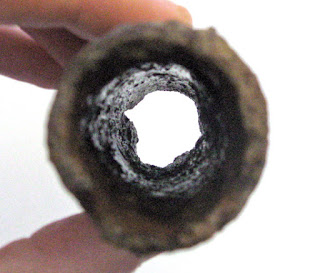 Some of the other larger stones inside were charcoal or coal, indicating its possible origin as steam-train paraphernalia, which would make sense given that it was found near the station (which has been in operation since the 1840s).

After taking some photos, I reasoned that having expended all this time and thought upon this object I might as well make a blogpost about it, or even a series of posts about found objects which might make semi-demi-entertaining reading for people as winter approaches.  In one final attempt to derive some meaningful use from this pipe, I blew into it at various angles to try to elicit tones from it.  With a hand covering one end, bamboo-flute style, it did produce a wispy tone, but I suddenly recoiled, remembering the fate of the scholar in M. R. James' 1904 ghost story 'Oh, Whistle, and I'll Come to you, My Lad' who finds a "metal tube about four inches long, and evidently of some considerable age" and clears it of earth (in same way I did), and obtains a note from it, heralding spooky experiences...   In the story, the protagonist has all his entrenched preconceptions about reality and its certainties upended as a result.  And... on second thoughts, maybe this isn't so bad?  And maybe this is what we essentially desire from found objects anyway?  The pipe is now in a drawer for possible future use. 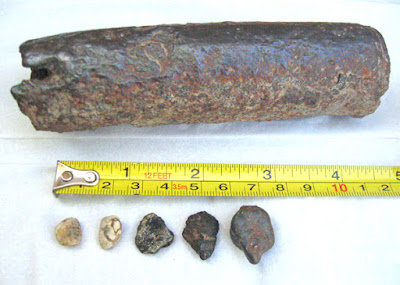 Posted by Daniel R Wilson at 12:33 No comments: