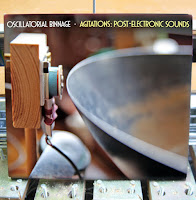 Finally.  After countless struggles finding an outlet for this uncategorisable work, Oscillatorial Binnage's long-delayed album is out at last: 'Agitations: Post-Electronic Sounds'.  It's on the Brussels-based Sub Rosa label - physical CD copies are accompanied by a colour illustrated booklet, 'A Primer on Post-Electronic Technique'.  The album is entirely post-electronic, arbitrarily microtonal music created using mechanical assemblies of found objects, resonated with electromagnetic force fields.  Distribution has been slowed by the pandemic, but it's available on Bandcamp (and also directly from me via the main Miraculous Agitations site).  Mirroring the current situation, the album envisions an apocalyptic paradigm shift scenario, necessitating adaptation in the face of adverse conditions (in this case, an imagined post-electronic situation: how might musicians create exploratory electronic music, with its emphasis on waveshaping, filters and modulation processes, without any synthesisers?  This album provides the answer).
Oscillatorial Binnage is Fari Bradley, Chris Weaver, Toby Clarkson, and myself.  We've been performing together for fifteen years, during which time we've introduced many unusual new electroacoustic instruments, along with the concept of acoustic hacking.  'Agitations' features the electromagnetic resonators that I've been developing since 2004.  We've given many workshops around the world, teaching participants how to access the hidden frequencies of scrap objects using coils and force fields, and how, by acoustically combining workshoppers' apparatuses all together, even more complex sounds can be produced: communal apparatuses are fertile instruments for 'miraculous agitations'.

Miraculous agitations are instances of complex sonic progressions, usually emerging from clustered vibrating objects (see previous blogposts for more explanations).  Obtaining these emergent states requires patience, but the probability of such states occurring increases with the size of the apparatus.  In 2013, Oscillatorial Binnage spent a week at Maggie Thomas and Bob Drake's Borde Basse studio in the south of France, loaded up with as many salvaged/adapted objects as we could haul.  Over the course of our stay, we gradually coaxed elusive 'miraculous' states to emerge from our vibrating apparatuses, not without some grind (Bob, engineering the proceedings, notably had a box of headache tablets on standby).

Bob and Maggie's array of microphones captured many moments when our apparatuses would become locked into resonating grooves.  The album collects all these instances, recorded entirely acoustically without any electronic processing.  These moments - technically known as 'emergence' - are one of the principal advantages post-electronic apparatuses have over electronic synthesiser-based equivalents: the possibility of unexpected sonic events arising from an infinity of real-world physical variables.  Another benefit is the economical, recycling aspect: all soundmaking and filtering modules can be found for free.

We're grateful for the recent kind reviews of 'Agitations': "a panorama of hypnotic and metamorphic alterity"... "a sorely needed reminder of the miraculous in the mundane"... "bizarre titillating soundscapes" ... to quote a few.  The sonic alchemy was picked up on in Julian Cowley's review in last month's The Wire magazine: "an alchemical transmutation of the routine world".

Since live performances are unlikely under the present conditions, we hope to aerate some special material over the next few months.

'Agitations: Post-Electronic Sounds' is out now on Sub Rosa.

Posted by Daniel R Wilson at 11:00 No comments: