Back in September 2018 I posted the "I Found a... Pipe" blogpost - an attempt to initiate a series of found object accounts; exploring the dynamics of curiosity, the chance encounters, the chains of association, the pratfalls and prat-uplifts that may accompany such discoveries.  One of the persistent themes of this blog is the idea that electronic-equivalents of soundmaking processes can be found for free in the physical world - an ideal driven by poverty and its resultant anti-capitalism, and accompanying scepticism towards commercial electronic hardware flavours-of-the-months.  Whereas the pipe of 2018 had limited soundmaking value, this new blogpost examines the musical scales obtainable from multi-holed hollow flints, found during pandemic walkabouts. 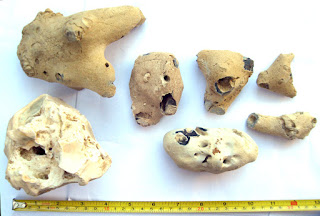 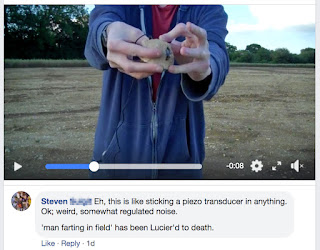 More can be heard on Wavelength, broadcast on Resonance 104.4FM on 19th June 2020. "A programme of multiple agendas presented by William English. This week: a tape sync with Oscillatorial Binnage member Daniel Wilson who, prevented from bin-diving during the Covid-19 epidemic, instead turns to "ground-diving" to dig out unusual stones from the earth. The potential for producing 'rock music' is showcased after a lengthy preliminary chat with William on the current state of the second-hand book trade."
Posted by Daniel R Wilson at 15:53 No comments: