Aki Onda's 'I Lost My Memory' 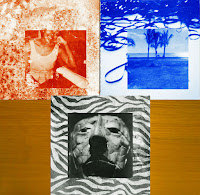 Aki Onda's Cassette Memories project is being digitally re-released in its three volumes by Lawrence English's Room40 label.  Cassette Memories' first two volumes were released in 2003, with a third appearing in 2012 - all originally on CD.  FACT magazine's recent feature gives an idea of the extent of Onda's ongoing project.  Cassette Memories draws upon his vast collection of dictaphone tape recordings, starting in 1988, documenting his travels around the world.  The best way I can describe Cassette Memories is as the closest thing to being able to listen to the raw data contents of a 'downloaded' human mind, in all its dream-like non-linearities.

To shed more light on the paradoxically personal yet impersonal project, a booklet has been published by Room40 to coincide with the digital release, to which I supplied an essay entitled 'Tape, Psyche, Montage and Magic: The Cassette Memories of Aki Onda'.  This text examines the numinous qualities of tape (psyphonics are touched upon).  Limited to 200 copies, the publication is entitled I Lost My Memory and contains Aki Onda's photography and an illuminating artist's statement.  The fact that Cassette Memories is a digital release rather emphasises its 'cassetteness': lively non-linear harmonic distortions, signal compression, random noise grain, all present in even the highest grade cassette tape... but these herald deeper psychological implications - parts of a depersonalisation process which is explored further in the booklet.  I Lost My Memory takes its name from an obscure, hitherto anonymous 1932 autobiography of the same name: I Lost My Memory: The Case as the Patient Saw It, published by Faber & Faber.

The 1932 book is mentioned in my essay where, for the first time, its author's identity is revealed to be agricultural researcher Clement Heigham (1890-1979).  More details can be read in the booklet.  Ascertaining Clement Heigham's authorship was a peculiar process.  I'd written to Faber & Faber's archivist years ago, who unhelpfully refused to share any details or even say whether any documents survived.  I Lost My Memory: The Case as the Patient Saw It appears to be the first full-length first-person English-language account of psychogenic memory fugue, and it became a key title in my research where data repositories are trawled to find identities of anonymous old authors.  I therefore tried to unveil the authorship using only the data provided in the book.  As its author admits in his 1932 foreword: "every book is a public exposure of its author" giving "little peeps" when they least expect or intend it.  These "peeps" are the clues future researchers can use to triangulate the whereabouts of a writer within digital archival datasets, thereby bringing to life submerged and forgotten stories (stories even half-forgotten by their own authors in this case).  Whether the residue of memory resides in written or sonic form, the idea of this residue being tweaked, assailed, jostled or recollated to bring new revelations and an ever-deepening 'theatre of the mind' has some affinity, I think, to what Aki Onda engages in with his tapes.  Onda questions how we process reality, working with (and manipulating) the essence of memory to feed back upon his own compositional procedures.  Cassette tape is his medium for these enquiries.

When I interviewed Aki Onda last year, I forgot to ask what brand of audio cassette he prefers (a trivial question perhaps).  Memorex?  Onda has said that his tapes are like a surrogate memory to him.  The Memorex Corporation's branding similarly hints at data storage products as prostheses to remembering.  There's also a Memorex advert from the early 1980s unintentionally verging on the esoteric: enigmatic statements regarding Memorex's new High Bias tapes foreshadowed the 'hauntological' essences that would later be felt within the obsolete medium decades later: "you'll find that when you record on Memorex an extra dimension emerges.  Now you can capture that elusive quality that turns sound into music and then makes music come alive".  One such "extra dimension" is enterable via Aki Onda's Cassette Memories series.

The artist's book Aki Onda: I Lost My Memory is out now on Room40 and includes download codes for Cassette Memories I, II and III.