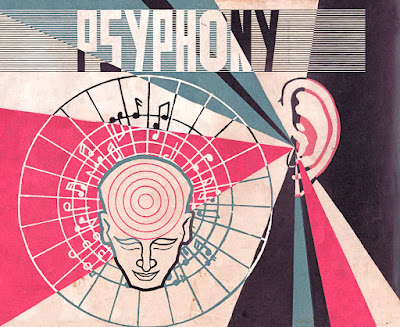 Coined by soundscape theorists Stuart Gage and Bernie Krause, the terms biophony, geophony and anthrophony have come to represent the complete range of sound-types audible within natural recordings (referring to biological sounds, geological sounds, and human/machine sounds).  March's eclectic issue of The Wire (#409) features my piece on psyphony - an impish addition to this trio. 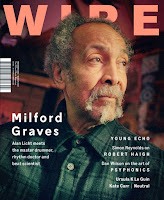 Gage and Krause's terminological trinity isn't a totally inviolable gamut.  The definitions can be chipped away to some pedantic extent, e.g., where do those rare sounds that penetrate earth's atmosphere from outer space fit into this?  Appropriate terms might be 'cosmophony'(?) or 'astrophony'(?).  But I digress slightly...  The Wire's article - appropriately titled 'Further Listening' - goes far beyond this into more wayward territories, introducing psyphony as a capturing of hypothetical intangible essences of thought and idea within sound.  (Readers of this blog may be reminded of the previous blogposts on Delawarr Laboratories' "thought-to-sound" experiments).

Without giving away too much of the piece (which is a fun 'thought piece' whilst also containing fresh research-nuggets such as the BBC's radio telepathy experiments and J. Tyssul Davis' odd never-before-discussed 1928 publication The Sound of Your Face), it will suffice to say that the term psyphony can be applied to audio pieces that challenge or call into question the extent of any hearing person's sonic perception.  However spurious psyphony may appear, its concept can be discerned within today's experimental music and radio art, from occult/quasi-occult sound practices (for example - Silent Records' compilation Tulpamancers: A Collection of Sonic Thoughtforms) to the more procedural technologically-geared sonifications and data mappings (as with Masaki Batoh's Brain Pulse Music).  It spans various genres.  The concept of psyphonics came into focus whilst contemplating Viewfound's EP Memorate, a dense ambient EP aiming to capture memory essences.  The concept was also tentatively trotted out to describe the fascinating sound-work of Aki Onda.

Some may view psyphony as indicative of a recoil from modernity's technological materialism.  To those who may decry its 'woolliness', they should bear in mind that similar ideas can be found in plain sight in the most sedate framings...  When I first visited The Wire magazine's office some years ago - back when they were situated on the upper floor of a building near Spitalfields Market - interesting music was being played.  I asked what the piece of music was.  I can't remember the answer to this, but more memorable was the casual remark that every month, any music played in the office gets listed in The Wire's special 'Office Ambience' tracklist.  As a little metaphysical aside, it was quipped that the music heard in the office might be somehow ingrained - as a quantum essence - within that month's issue.  It was said in jest... but as George Orwell once commented: "every joke is a tiny revolution"....

Posted by Daniel R Wilson at 07:00 No comments: