Further remarks on synchronicity and coincidence...

One of my research interests is in old anonymous literature and how digital archives may be used to uncover the names of those long-unknown authors.  A few years ago Fortean Times published my exposé of the 1935 book Crook Frightfulness (written by an apparently delusional man pursued by evil ventriloquists).  As mentioned in the previous blogpost, this month, the Fortean Times #341 (June 2016) contains the fruits of my latest research - unmasking the identity of the author behind a strange book called Atomic-Consciousness published in 1892 - written by John Palfrey.

I found Atomic-Consciousness a few years ago at a junk shop, and considered it unusual enough to merit further investigation.  It turned out that the book was pseudonymously authored by a man who continually experienced (and instigated) coincidences.  He tried to turn this to his advantage with his attempts to force wished-for thoughts to recur as real events.  Coincidentally, this month's Fortean Times also contains Jenny Randles regular column which happens to be about coincidences too, or rather, Jungian synchronicity.  Randles observes first-hand that talking about coincidences causes them to happen.  This rings very true, because during my research into Atomic-Consciousness I decided to keep a detailed synchronicity diary of my own, just like its author did - full of events and dream-fragments - and every few weeks a few convergences of thought were noted.  But whether this was simply selective-perception or not, I don't know.  Most were recurring frames of inner thought rather than appreciable coincidences. 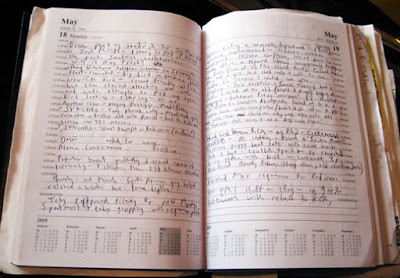 I'm not a natural diary-keeper and I've stopped maintaining the diary now, but my final synchronicity entry is a worthwhile example...  In the Fortean Times' 'Atomic-Consciousness' article, I cursorily cited Noel Edmonds' 2006 book Positively Happy.  In many ways Edmonds' book is similar to Atomic-Consciousness - it's full of semi-autobiographical anecdotes supporting the idea of willpower as a force to actualise wants.  The main difference is that Edmonds focussed on upbeat positivity, but Atomic-Consciousness is laced with profound negativity.  Its down-at-heel author was prone to ranting, particularly in later abridged editions where he raged at the lack of recognition of his genius - the publication of Atomic-Consciousness was said to be "a thunderbolt falling from Jovian sky".  Palfrey writes with great grandiosity (and weirdness): "Atomic Consciousness at first aroused, on account of originality in avalanching concept of thought, revelation and teaching: and by contravening established customs and opinions, with engrafted beliefs, counterblast of cyclonic furore in all classes..." 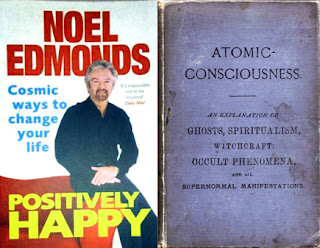 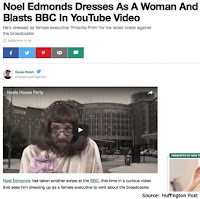 On the day I received the Fortean Times, I observed the 'Atomic-Consciousness' article and noted my mention of Edmonds' book, briefly wondering whether the jump between 1892's Atomic-Consciousness and 2006's Positively Happy was a too-surreal juxtaposition.  Then... synchronicity struck!  Half-an-hour later, I read on a news website that Noel Edmonds "blasts the BBC in YouTube video" where he dressed as a character named "Priscilla Prim", a nominally comedic video that some commentators interpreted as a "bizarre" and "bitter" rant at the BBC with reference to his own previous TV work.  This instantly conjured to mind John Palfrey's bitter Atomic-Consciousness effusions, but also the fact that John Palfrey wrote under the pseudonym "James Bathurst", just as Edmonds adopted the guise of "Priscilla Prim".
It seemed a very strange coincidence.  Mystery can be enjoyable, but to be frank I'm glad I'm no longer keeping a synchronicity diary, as expending energy in merely noticing these things can be distracting. 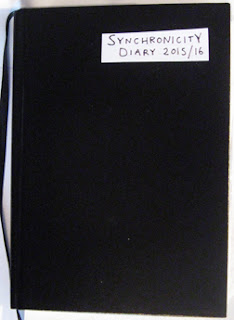 Posted by Daniel R Wilson at 04:55 No comments: