In Search of Miraculous Agitations

Now I must explain the title of this blog - 'Miraculous Agitations'.  Miraculous agitations are complex sounds which fortuitously occur every now and then in the oddments of acoustic furniture surrounding us.  Any agitational forces such as draughts of air, hums of electromechanical appliances, etc., allow for vibrational interactions between clustered objects.  When combinations of different agitational forces are acting simultaneously upon clustered objects, fascinating flourishes may be heard.

This month's Brooklyn Rail features a article I wrote on this topic - 'Miraculous Agitation: Scroungings Toward a New Acoustic Synthesis' - which should help explain things. [The live performance mentioned in the article may be heard here].

The occurrence of fascinating sonic flourishes (the miraculous agitations) in our acoustic environment suggests the possibility of building a mechanical synthesiser to acoustically reproduce the miraculous agitations.  Pulleys, jacks, clamps, levers and cranks control the resonances and couplings between vibrating physical elements. 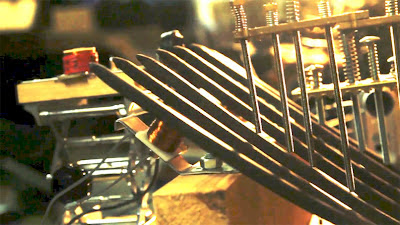 A lot of time and thought has gone into the construction of these apparatuses - many of which use electromagnetic feedback: a multitude of ferric objects 'bowed' electromagnetically.  What is immediately clear is that physical vibration exploits any weak points in an assembly.  Untightened bolts will unscrew, parts will migrate, mechanical hysteresis alters the resonant properties of anything remotely flimsy, and objects placed atop vibrating surfaces will be shunted in a hot potato effect.  Subharmonic undertones are produced, along with many failed subharmonics (unfulfilled bounces).  The picture above shows a resonated pitchfork overarched by subharmonic selector prongs.  Possibilities begin to present themselves when resonant objects are allowed to periodically collide: a physical kind of granular synthesis is effected.  On top of this, entrainments occur between feedback systems.  When sympathetic resonance is also taken into account, the sonic potential of mechanically moderated apparatuses is evident.

There is a problem with this.  If it is possible to reproduce a miraculous agitation willy-nilly, it will lose its miraculousness.  However, quirks of acoustic interaction operate on knife-edges beyond our immediate perception.  Also, it is not practical to 'box up' vibrating elements into an enclosed 'synthesiser' construct - everything must be readily accessible.  Even with all axes of control at our disposal, miraculous agitations certainly remain elusive.  I have had to scale down the control mechanisms to near-microscopic ranges.  Magnifying glasses are used to moderate grazing collisions.  These acts of timbre-seeking serve to create fertile ground for chance flourishes to occur.  Even with magnifying instrumental aids, the apparatus is never fully under control owing to the bewildering array of variables even in a primitive few stacked objects.

In the Charles Dickens book 'David Copperfield', there is a character named Wilkins Micawber, a debtor who is known for his hopeful motto that 'something will turn up sooner or later'.  This attitude is often referred to as Micawberism.  It is by applying Micawberism to music that the miraculous agitations may be patiently anticipated.  It may not be known what expressive form or character they will take, but if one waits long enough at a vibrating assembly, something miraculous will indeed turn up.

Just as the assembly is played through experimentally scrounging for these interesting moments, the apparatus is similarly constructed from amalgamating scrounged materials picked from the trade waste bins of small businesses, charity shops, factories, etc.  "Soiled knick-knacks" are sought (see local newspaper report in the previous posting).  This dispenses with commercial hardware fetishism, and relegates the 'composer' to compositor, working in the service of the apparatus, rather than vice versa.  All pretensions are placed on the back-burner during such services.

I had tried to shoehorn the study of miraculous agitations into my university studies in 2005, but was dissuaded at the time due to my lack of articulateness on the matter.  In time, poverty taught me the correct lingo.  Continued dustbin investigations have led to the crystallisation of 'dream mechanics'.   'Dream mechanics' may sound like a troupe of male strippers, but it actually refers to idealised mechanisms suggested by conjunction of concepts.  This blog was originally intended to present these mechanics sequentially, but this would appear to be too esoteric to contemplate.  I will, however, elaborate on various mechanisms and miraculous agitation techniques in later postings…

Available here, on the 'Post Electronic Sound Harvesting Initiative' Soundcloud page, is a rare live attempt to produce miraculous agitations in 2009 at the Gasworks Gallery.  It failed somewhat, but miracles can't be summoned at will in such a relatively short space of time, and apparatus is not easily transportable.  Some electronic blasts are also fed into the agitators in the hope the feedback strands may be periodically unsettled to produce changes in vibratory states (to avoid the boredom with comes with waiting).  There are still some moments of timbre-seeking approaching miraculousness.