As part of Resonance 104.4FM's broadcasts from Raven Row, a show I produced, voiced by Will Luscombe (of the exquisite Luscombe's Choice), will be aired on Friday 17th June, entitled 'The Philosophy of Mediadropping'.

'The Philosophy of Mediadropping' is a relentless musing on the practice of mediadropping - the dropping of home-made CDs, DVDs, tapes, books, manuscripts, etc. in public places for random people to find. 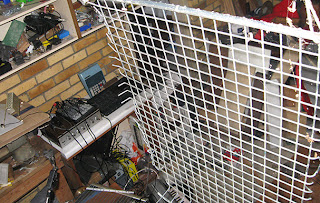 Mediadropping is a pathological habit of mine.  My old Resonance show, 'The Exciting Hellebore Shew', documented many mediadroppings in detail (or tapedroppings as I referred to them back then, as cassette was the weapon of choice).  Special 'music' was consigned to cassette or CD-R and scattered hither and thither.  Over time, an instrumentarium was built up specifically geared toward sonically shocking unsuspecting mediadropping recipients.

Mediadropping may be seen as a physical analogue of the 'crapflooding' and 'trolling' phenomena of the internet age, but this is a debatable comparison to be treated in a later posting here.  In the meantime, tune in to catch 'The Philosophy of Mediadropping' and hear Luscombe's voice fed through a sawn-off trolley and a garage door.  Feel the cassette-grot erode your tolerance threshold.
Posted by Daniel R Wilson at 03:10 No comments:

Someone told me that I should be more proactive in advertising my activities.  Blogsmanship was suggested as a partial solution to the debilitating malaise instilled through studying Sonic Art.  For further details of this condition, see my article 'Sonics in the Wildernesses - A Justification' (published in the April 2011 issue of The Brooklyn Rail).  It's a rather whinge-heavy text, but should provide some orientation.

More postings to follow...
Posted by Daniel R Wilson at 07:25 No comments: