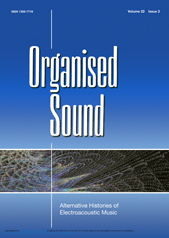 My situation is becoming unbearable.  Faced with closed doors everywhere, the bleakness is gut-wrenching (and it's amazing how far guts can be wrenched).  Everywhere, it seems, dilettantes are ascending to lofty positions whilst the hardest working researchers rot: poor, unacknowledged and girlfriendless/boyfriendless.  This may sound bitter, but you'd be bitter too if lacerated by the implicit insults within hundreds of job rejections (e.g. employers that state they're "committed to hiring only excellent people" [which is always untrue] - not to mention the humiliation of rebuffal from unpaid thrift store volunteering), and subsequent regular intimidation from police for bin-diving and electroacoustic busking.  Why is this happening?  Do I have some sort of character flaw?  My parents assure me "no" as I wail in despair covered in filth, but these struggles certainly imply so...  it all points toward a character mismatch between recruiter/recruit - or 'mismatched impedance' as Daphne Oram analogised defective society/individual interfacing (a composer who herself found recognition to be elusive - her work becoming more widely known only after she died in 2003).

Organised Sound Vol. 22 No. 2 contains my lengthy paper titled 'Failed Histories of Electronic Music' outlining the mechanics of failure (vividly, I hope) via the 'failed history' concept that foregrounds the dynamics between culture and the individual 'agents' within it.  Having experienced successive failures, I'd like to think it carries much weight.  In an Oramesque spirit, I've provided an analogy in the form of 'failed subharmonics' - spikes of activity that are never re-referred to or 'recontacted' within the historical continua ever again.  I present (or jumpstart) the stories of three 'failed histories' - hitherto unexplored never-discussed electronic music precedents absent from all its textbooks - drawn from my own intensive research with hard-won primary source material: 1) "Electric musician" Johann Baptist Schalkenbach, 2) John Gray McKendrick's first electronic sound demonstration in 1895, and 3) radio oscillation in the 1920s.  The latter vignette actually came about through the discovery of rare early radio ephemera found whilst bin-diving.  Certain neglected aspects of Futurism also haunt the paper.  Regular readers of this blog may recall that in 2015 I tried to self-publish writings related to all this in the light of zero publisher interest (it seems failed histories beget failure).

The idea of failed subharmonics emerged from apparatus-building work in my long-running post-electronics / miraculous agitation-seeking musical project (which, coincidentally, is briefly referenced by another author elsewhere in the same issue).  The presence of subharmonics within motion-inhibiting vibrating physical systems has been demonstrated by José A. Sotorrio.  My own research and soundmaking has revealed failed subharmonics are also plentiful.  Failed subharmonics constitute blips within a tonal continua that didn't fulfil their 'bounce' potential to reconcile themselves as periodic undertones.  Pitchless components of vocal fry are an example of this.  I knew that another author had used the term "failed subharmonics" somewhere before - but it was unGoogleable.  Googling "failed subharmonics" (or hyphenated "failed sub-harmonics") yielded only my own writings.  Eventually, among my cupboards I rediscovered its origin: "failed subharmonics" were first suggested - only very fleetingly - in a 1991 paper by Robert Schumacher as a possible explanation for the non-periodic sonic 'grit' within acoustic sounds.  Schumacher's paper, in Pixel magazine, is not currently on any search engines (web or academic) - a reminder that a whole world exists outside Google and its ilk!

'Failed Histories of Electronic Music' contains some 'reveals' necessarily compressed into single sentences or less.  For example, in the course of the paper, the true identity of Maskelyne and Cooke's Egyptian Hall in-house musician (and composer) "Charles Mellon" is - for the first time ever - revealed to be Lawrence John Holder.  Tracking him down was no mean feat.  I have charted his life story in an another unpublished paper, but no paying outlet seems forthcoming (is it too much to ask for recompense for the travel and archive-diggings?)  Nobody seems to care.

As a further example of 'ignored output phenomena', elsewhere, today's Guardian Guide carries a preview of this Friday's Delaware Road concert at the Kelvedon Hatch nuclear bunker, yet there's no mention of my Radionics Radio contribution which involves *electroacoustic music made with radionic thought-frequencies* and will feature never-before-heard excerpts from restored Delawarr Laboratories' tapes!  These are unprecedentedly novel and bold new territories with great philosophical implications, surely?  "Can thoughts be embedded in musical tunings?"  Why the neglect?  Evidently there's some mechanism of resonance inherent in culture which propagates some ideas/works/figures and ignores others, as if they're impervious to uptake (as with failed subharmonics).  Putting aside my own injured ego, the blurb also fails to mention that Delaware Road is in fact part of a monumental immersive theatre production (on a scale seemingly approaching that depicted in Charlie Kaufman's Synecdoche, New York) in which all the acts are building blocks - its entirety devised and storyboarded by Alan Gubby.  Anyways...

My proposed paper for the Journal of Sonic Studies titled 'Post-Electronic Music: Sound, Materiality and Electromagnetic Force Fields' - on the development and implications of electromagnetic force field resonation - has, bizarrely, been rejected.  Ditto my paper on the first ever electronic sequencer employed by Hugo Gernsback at New York's WRNY in 1925.  My freshly unearthed discoveries and original researches seem to not culturally adhere - despite me working hard and making as much noise as I can about them...

Aside from being deeply frustrating, those aforementioned culture-interfacing snarl-ups are first-hand evidence that 'failed histories' are in the making right now.  A good friend and cyber-contact of mine committed suicide in 2010 - a hugely talented poet and electronic musician - yet this person seems entirely forgotten.  Ironically, it feels improper to invoke this person's name here in what's superficially my own ranty cheap-shot at power structures within culture.  Ergo, if the current trend is to valourise unrecognised musicians and thinkers of the past, we should also remember that - in the present day - by merely neglecting to iterate and reiterate, each of us (including me) partakes in the 'make-or-break' mechanism that's still producing failed histories - more so than ever.  We are all filters.  Consider the world of contemporary electronic music outside the narrow confines of institutions: a lively landscape populated by inmates of airtight niches, savants rapt by idées fixes, bedsit tinkerers locked in inner battles with their own recalcitrance, goa-psytrance consciousness-escapees and ganja experimentalists living-for-the-moment: characters resistant (or invisible) to the academicised platforms of electronic music.  It would seem that the potential for failed histories is more prevalent in experimental music than anywhere else.  Consider also the ubiquity of certain music theorists du jour (almost always men) who hog positions that could be filled by seven or eight other theorists all keen for their own outlets to publish, talk or perform; outlets eclipsed by a gravity - a monopolised field of resonance - surrounding one figure.  No doubt future researchers will be spoilt for choice for unchampioned quarry when they start burrowing through the 21st century's data heap.

Maybe if one's activities can be adapted to adhere to the present cultural continua, the activities may find resonance (which is easier said than done) and avoid the fate of a future 'failed history'.  To return to the physical analogy - in post-electronic apparatuses, by making slight mechanical adjustments between parts, instances of failed subharmonics can be turned into steady subharmonics happily riding along the train of tone.  It's gratifying that 'Failed Histories of Electronic Music' was published in Organised Sound in a topically relevant issue (and filled with other excellent papers on the subject of 'Alternative Histories of Electroacoustic Music'), and it even forms the first paper in the issue - I thank the editors for including it.  Alternative histories are always more fascinating than the 'established' histories...  but that's of little comfort to the unrecognised, wheezing players behind those alternative histories, who would've undoubtedly much preferred at least some nods toward gainful employment while they were alive.