Build your own Francis Bacon 'Sound-House' 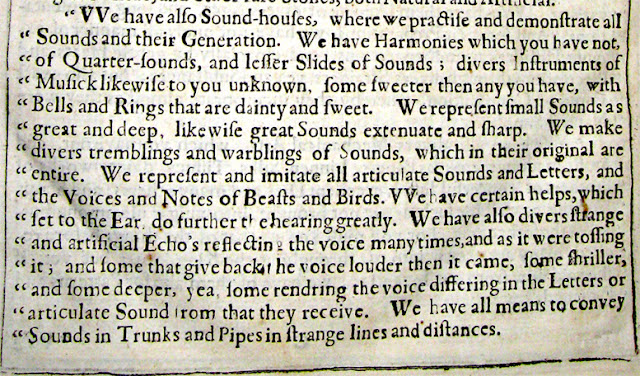 I feel behaviourally aslant in my secret indulgence for dolls house paraphernalia.  But that's mainly due to a culturally-instilled inhibition that really needs to be shaken off.  After all, dolls houses are affordable, but real houses are not.  As the saying goes, you must "live within your means".

For some years now I've itched to create a Sound-House, as defined in Sir Francis Bacon's unfinished fable 'New Atlantis' (1624):

“We have also sound-houses, where we practise and demonstrate all sounds and their generation.  We have harmonies which you have not, of quarter-sounds, and lesser slides of sounds; divers instruments of musick likewise to you unknown, some sweeter than any you have, with bells and rings that are dainty and sweet.  We represent small sounds as great and deep, likewise great sounds extenuate and sharp.  We make divers tremblings and warblings of sounds, which in their original are entire.  We represent and imitate all articulate sounds and letters, and the voices and notes of beasts and birds.  We have certain helps, which set to the ear, do further the hearing greatly.  We have also divers strange and artificial echos reflecting the voice many times, and as it were tossing it, and some that give back the voice louder than it came, some shriller, and some deeper, yea, some rendring the voice differing in the letters or articulate sound from that they receive.  We have all means to convey sounds in trunks and pipes in strange lines and distances.”

A previous posting (here) touched upon some visual clues as to how Francis Bacon may have designed his Sound House if he had been tasked with realising one.

The "we have also sound-houses" passage has come to be quoted as a foresightful envisioning of electronic sound treatments.  Yet the majority of modern electronic works invariably pivot on trickeries and deceptions of the ear - keeping the listener 'in the dark' as to the nature of sound sources and treatments.  (Also, Bacon's words conjure to mind a mechanical acoustic endeavour with contrivances similar to those imagined by his inventor contemporaries Salomon de Caus or Cornelis Drebbel.)  Allying Bacon's Sound Houses with electronic sound technique seems incongruous when Bacon later writes a few paragraphs later:

“And surely, you will easily believe that we that have so many things truly natural, which induce admiration, could in a world of particulars deceive the senses, if we would disguise those things, and labour to make them more miraculous: But we do hate all impostures and lies insomuch, as we have severely forbidden it to all our fellows, under pain of ignominy and fines, that they do not shew any natural work or thing adorned or swelling, but only pure as it is, and without all affectations of strangeness.”

If I ever had the opportunity to build a full size Baconian sound house, it would contain resonant granite sarcophagi (akin to those found in Egyptian tombs), moveable granite panelling and compartments.   Deep stone tunnels with mix-and-match obstructors.  Parallel surfaces for flutter echoes.  Bellow-pumped pipe tone generators and trumpeted alterants.   Clues may also be found in Bacon's acoustical investigations documented in his Sylva Sylvarum.  In the meantime, I will continue experimenting with my dolls houses...  The dolls houses are more like weird garages, over-plumbed within an inch of their daintiness.  And the 'dolls' exist only in the mind.

Miraculous agitations in our acoustic environment - as I've written elsewhere - indicate the possibility of real-world sound rivalling electronic sound in terms of tonal complexity and delineation.  It is a question of engineering.  The miraculous agitation assemblies eventually come to resemble 'houses' - or 'garages' - stressed with the addition of perilously piled Jenga-like miscellany.  An 'electromechnical Baconian dolls soundhouse garage'.   With all property so dismally unaffordable,  I would like to live in one of these... cohabiting with Cliff Richard's proverbial 'Living Doll' - a husk of hope. ("Take a look at her hair, it's real / And if you don't believe what I say, just feel / I'm gonna lock her up in a trunk / So no big hunk can steal her away from me" [?!])
Posted by Daniel R Wilson at 09:18 1 comment:

Ivory Tower Misdoings, or "Something for Nothing" 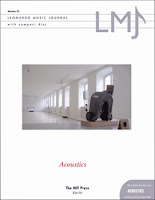 The current acoustics-themed Leonardo Music Journal (#22) features my paper 'Miraculous Agitations: On the Uses of Chaotic, Non-Linear and Emergent Behaviour in Acoustic Vibrating Physical Systems'.  It gives an overview of the philosophy of miraculous agitations (or thaumatacoustics: acoustics compounded with the prefix 'thaumata', meaning 'wonder') and methods of electromagnetically resonating object-assemblies.  In the LMJ paper, I avoided describing how poverty shaped the philosophies behind miraculous agitation apparatuses.  I'll descant upon this aspect here.

An older composer - either misunderstanding my words or trying to 'get a rise' from me - once described the miraculous agitation technique as the "musical equivalent of benefit fraud"(!).   He believed that it was sheer laziness to sit and make arbitrary mechanical adjustments to piles of vibrating junk in the hope that a composition would compose itself.  I suppose he thought it was something like getting a "finished composition" for free.  Whilst his unusual angle was very thought-provoking, I'd have to summon to memory a quote that would be appreciated by someone of his generation: "I think you're entering the realms of fantasy here, Jones."

Music is traditionally composed - or 'worked out' - in 'horizontal' time (as most music sequencers scroll).  Thaumatacoustic apparatuses on the other hand are scrounged together, assembled and 'worked out' beforehand in an instance removed from time.  So the 'work' goes into the arrangement of global conditions outside time.  The composing here is principally a process of searching for objects, assembling objects and arranging an initial state in 'vertical' time, before the electromagnetic agitators are even switched on.  It's more about 'compositing' than 'composing'.  The actual tonestuff emerges over time, almost of its own accord, from largely unforeseen interactions within the assembly. For an apparatus to be capable of producing sonically useful 'wonders', patience and perseverance is essential.  It is true that the apparatus is built from stuff pulled out dustbins - this is perhaps the part that the aforementioned critic took issue with.  This seems a contentious area (and it really shouldn't be).  To this day, passive-aggressive people still crow "should you be doing that?" and "go away" whilst I'm searching for acoustic parts in bins.

I'd be a great sound designer, researcher or archivist at the British Library's sound archive (for example), but frustratingly, employment has not been forthcoming.  I've ranted about this elsewhere...  Jobseeker's Allowance was cut off.  Poverty compelled me to rummage through bins, for food, entertainment, tools and raw materials for quasi-saleable crafted miscellany (including miraculous agitation assemblies).  It's scandalous to behold how much usefulness gets discarded.  The thaumatacoustic philosophy is ensconced in these experiences.

In the light of this seemingly beggarly state, it was invigorating to find on March 2nd that five messages had reached me through diverse channels.  The messages were all from one researcher for RDF Television / Zodiak Media, apparently involved in making a TV documentary for Channel 4:

Hi there,
I was wondering if you might be able to help me. I work for a TV production company called RDF Television and we are currently working on a new show for Channel 4 – which looks into all the weird and wonderful things you can get for free.

I have come across a sound artist called Dan Wilson who creates musical instruments out of unwanted goods and electrical parts he finds in skips and I read that he sometimes performs with Oscillatorial Binnage.

These TV researchers often cast their net widely, and I did suspect that they might find me too weird a fish for their fishtank.  I described my practices and provided links to various examples, but also lamented that I couldn't produce more expository audio examples due to lack of equipment (more high quality microphones would be a Godsend).

The correspondent elaborated on their remit:

I’m not sure how much I explained about the show.  We’re making a consumer programme for channel 4, that looks into all the things you can get for free – weird and wonderful things that you might not think of.

I really liked the idea that you make instruments from electrical  items you find in skips and that is what I was interested in talking to you about. We’re looking for people who are experts in their field who would like to talk on camera about their experiences – for example the pitfalls of skip diving / the best places to go for the best finds – so we’re looking for a spokesperson who can tell us about the ‘art’ of skip diving. It’s not so much about the music itself, I’m afraid.

I’m not sure if this is something you would be interested in at all?

Yes - it sounded worthwhile and useful exposure.  But then came the bitter irony.  Any payment?  "There is no payment, I’m afraid, as we don’t have the budget."   So, a programme about the "weird and wonderful things you can get for free" is trying to source the raw materials for free!

This reminded me of a certain King's Cross publisher who, some years ago, sought to find homeless 'renegade gardeners' to write for them about their personal experiences of homeless gardening.  There was no payment for this work, yet the book would retail for +£15 per copy.

I gently berated the RDF correspondent: "Not wishing to sound exhortational - it seems a bit skew-whiff to make a programme about bin-diving - a last resort for the poorest and most vulnerable in society - and not pay the interviewees!"

Nevertheless, I agreed to provide some insight for this programme, but suddenly the doors had closed tightly:  the reply read "I’m afraid the format of the show has slightly changed in the past couple of weeks. When I last spoke to you we were still in the early research stages and seeing what stories were out there, but now we have fully cast all our contributors and experts."

Disappointments far outnumber wonders when searching for miraculous agitations.  I sighed, and an apparatus set on a cardboard box sympathetically buzzed in an interesting manner.
Posted by Daniel R Wilson at 09:51 No comments: