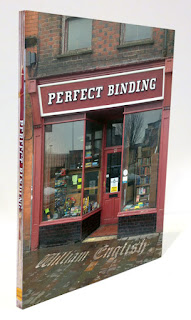 About a year ago, the filmmaker William English asked me, a sound designer, to be graphic designer for a book project he was planning.  This was just one of many lateral decisions taken by William English towards producing a uniquely uncategorisable artefact now available to buy: 'Perfect Binding: Made in Leicester'.  Even though I worked closely with William on this book, I'm unqualified to make definitive remarks on it.  It covers an era and culture I'm not 100% au fait with, and further complications are afforded by William's wilful abstractions.  Nevertheless, some opinions and gossip can be provided here.

The book features large roman numeral chapter numberings, and the use of archaic-looking discretionary ligatures on the typeface (stopping short of using the 18th century long s - ſuch a ſtrange flouriſh might've been a ſtep too far).  These unhip, non-modern quirks are deliberately deployed to subvert the book's subject matter, which superficially revolves around 'mod' culture in 1960s Leicester.  Anyone buying it for 'mod' reasons might be perplexed...  The book is a surreal dreamscape shifting between gritty Leicester vignettes: interviews and reminiscences interspersed with arresting, and sometimes baffling, archival matter.

Over the past few weeks 'Perfect Binding' has been creeping into shops.  It was recently spotted at Cafe Oto's Christmas fair earlier this month, where it sat on Resonance FM's stall, along with rare materials from the personal collection of Resonance's programme controller Dr. Ed Baxter (formerly of the LMC) whose Henry Cow posters and public information cassettes threatened to 'outodd' the oddness of 'Perfect Binding'.  It's important to introduce here the fact that Baxter is known for his Baxterisms.  Baxterisms are poetic emissions that paradoxically puncture all poetic pretence.  A Baxterism is both a verbal wrecking ball and a verbal building contractor...  Often contrarian, sometimes maybe temporarily devastating, Baxter had offered a satisfying one-word Baxterism for the title of William English's book: Omphalosophy.  At its production stage, this was earmarked to be its title.  Omphalos is Greek for "navel", and Leicestershire is indeed the centremost county of England; its geographical navel.  (The Ordnance Survey declared a point in Fenny Drayton, a village 15 miles from Leicester, to be England's true centre - a distinctly unexciting fact).  Omphalosophy also signifies navel gazing: a morbidly self-referential state of indulgence that pervades all self-published work to some degree (the blog you're reading now included).  William and I found Omphalsosophy to be a suitably profound and subtly self-mocking title for this work about Leicester-as-a-state-of-mind.  Unfortunately, I found that Omphalosophy had already been used for a book title over sixty years ago.  As newly-formed bands often despair with increasing regularity: "why are all the best names already taken?"

'Omphalosophy and Worse Verse: An Inquiry into the Inner (and Outer) Significance of the Belly Button' was published in Iowa, USA, c.1953, coincidentally by another William - a Dr. William Bennett Bean.  It was a slim poetry booklet, with curious illustrations.  One of Dr. Bean's poems discouraged William from using 'Omphalosophy' as a title: a poem called 'Amazonia: USA' presented as a "litany on the decline of the male in our growing matriarchy, written after a sullen view of insurance statistics and newspapers".  Dr. Bean was stubbornly non-progressive on gender matters: "And what I read does most alarm me / A soldier boy who left our army / Between new hormones and the knife / Is now a girl and may be wife", and so on...  Despite its curiosity, we didn't want to be associated with dusty old transphobia, especially as the first interviewee in William English's book is the trans artist Victoria Ashley who had transitioned from Jim Mellors in the 1990s.  But that's not to say that Ms. Ashley herself is any exemplar of progressiveness... Indeed, she's something of a sourpuss in William's interview, moaning that "women are such a scruffy load of bags today, girls going out with just tights on, showing their genitals and fat arses... oh, it really is disgusting."  Nevertheless... 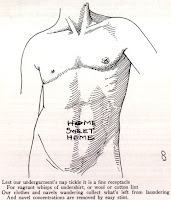 All characters in William's book, in fact, tend to exhibit this individualistic bite - a 'pulling apart' from other people, sometimes to self-destructive extremes (the book suggests this is a peculiarly male trait).  These volatile qualities led William to arrive at the title 'Perfect Binding' - a glue-based form of bookbinding in which 'perfect' is a misleading overstatement, as pages are liable to break apart with regular use.  Similarly, the personalities in the book jostle to disbind themselves from each other, perhaps in an attempt to escape Leicester itself(?).  'Perfect Binding' is actually published as a sewn binding.  Figures forcibly stitched together include some renowned characters such as William's film photographer brother Jack English, co-founder of the BOY boutique Stephane Raynor, and fashion photographer David Parkinson who died young.  But then there are the less-extroverted figures who selflessly and perseveringly sought to animate Leicester's cultural landscape (and who sometimes met with resistance), such as Peter Josephs who set up the Chameleon coffee bar on King Street, and Roger Brian De L’Troath whose short-lived 'Crescent' publication was Leicester's earliest arts magazine.  Beyond this, 'Perfect Binding' documents other figures of such obscurity that they approach the quality of 'thwarted histories': their stories are virtually unknown.  Familiar Leicester names like Colin Wilson or Joe Orton are mere footnotes here.

Leicester clearly isn't the most glamorous location, but it has recently received some attention elsewhere by author Shaun Knapp, notably 'Mods: Two City Connection' (2019).  Whereas Knapp provides a fairly straightforward history, William English's 'Perfect Binding' is proof of lived history's irreconcilable untidiness, as well as the multi-dimensionality of primary source material.  Everyone constructs their own reality; how can this be documented effectively?  For instance, 'Perfect Binding' devotes a whole chapter to the contested origins of a mysterious red suede jacket, worn by Leicester "face" and proto-Mod John "Jelly" Nixon at a time when such sartorial nonconformity might trigger public convulsions.  William English's group interview*, recorded in 2004, with Nixon, Stephane Raynor, and fashionable rogue Bob Hughes sheds no light on the matter, throwing up hazy, conflicting testimony.  The red suede jacket is symbolic of what is uncapturable by historians (but which is potentially explorable by artists!).

We are all inextricably tied to our formative cultural memories, and the 1960s contains William's.  I grew up in the 1990s, an era that holds a certain fascination for me - the ideals of modems, cyberspace and email.  Sometimes I feel that a form of investigative time travel is possible by a mixture of meditation and scrutiny upon archival footage of 1990s TV advert breaks, continuity announcements, or within CD-ROM magazine coverdisk directories, or in gunk plucked out from inside a rollerball-based computer mouse...  it is almost as if by tilting the artefacts slightly - metaphysically speaking - light can be shone down the memory tunnels to illuminate the past from a different, fresher angle, thereby exposing history's complex webbing.  This, I think, is what William's 'Perfect Binding' is getting at.  It's a fresh primary source nugget, preserving all the dimensions of raw absurdity, natural poetry and factual overlap that characterise real life's ongoing historical continua.

As well as sifting his archive, over the years William has been leafing through Leicester's local newspapers questing after what I presume to be that aforementioned metaphysical memory 'tilt' ('Perfect Binding' is the result of over a decade of interviews and contemplation).  William ceased researching any newspapers published beyond 1965, as his focus was on the cultural metamorphoses within the first half of that decade.  I, meanwhile, continued casually perusing for graphical inspiration.  This led to the discovery of what would later become the rear cover of 'Perfect Binding' - an extraordinary uncredited long-exposure photograph from the Leicester Mercury of September 5th 1969.  Titled "Picture 'painted' by Leicester’s bumpy roads," it was intended to highlight the issue of Leicester's poor road conditions.  Its creator is as yet unknown.  To end this blog-post, I quote the full caption for it below, as it pits the mundane against the the surreal, with a mildly snooty sardonic thrust... perhaps these are the special ingredients for a 'Leicesterism'?

"No, it's not another puzzle pic, but a brand new art form which we are calling 'car camera doodling'.  The white-on-black scrawligig was produced by a car passenger holding a camera on a half-minute time exposure to the windscreen of the moving car along Leicester's London Road.  The varying squiggle design was made by lights of other cars ahead through a camera shuddering itself under impact of Leicester's bumpy roads.  The result: A careless, surrealistic picture in the night.  Painted, it would probably fetch a fortune in the trendy art world." (Leicester Mercury, 5/9/69)

* Some of the interviews contained in 'Perfect Binding' were originally partly aired on William English's long-running radio series Wavelength on Resonance 104.4FM. 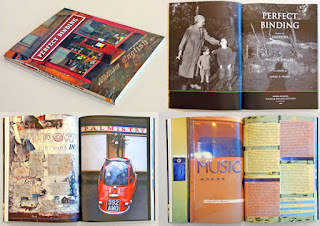 'Perfect Binding: Made in Leicester' is out now.
Posted by Daniel R Wilson at 09:27