Excess all Areas - Explosives in Music (The Wire #427) 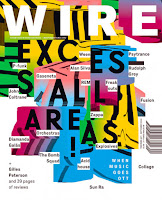 September's The Wire magazine is packed with essays on audio excess.  The issue is the thematic inverse of last year's Minimalism special (to which I contributed a short text on silence broadcast over the radio).  The opposite noisy extreme is explored this month, where I supply a piece looking at the history of explosives in music - titled 'Bomb Culture' - among many other eye/ear-opening contemplations on overwhelmingness.

This explosives+music history is compressed to bursting-point onto a single page.  One enjoyable example that didn't make the cut (deemed more fire-based than explosive-based) was Michel Moglia's 'L'Orgue a Feu'.  A whole book could be written on the subject...  Aside from everything mentioned in The Wire text, there were of course unintentional explosions in musical contexts too: dangerous blasts from mishandled limelight in Victorian music-halls, exploding magic lantern projectors, etc.  Also, of particular relevance to this Miraculous Agitations blog (where post-electronic soundmaking is the order of the day) are early 20th century pre-electronic endeavours to harness the power of explosive potential as an amplifying agent; pneumatic amplifier technologies (such as compressed air gramophones) powered by compressed air cylinders.

Very fleetingly, the rise of outdoor military quadrille bands in the mid-19th century is cited in The Wire piece (exploring the reasons for such bands' popularity at this time is another story).  It may appear that this aesthetic dogged all explosive+music alliances, most visibly in 1980s industrial music's camo-sporting, goose-stepping, theatrical edgelording (where explosives were often detonated indoors).  All this twitchy militarism may give the misleading impression that musical explosivity is an unhinged, particularly masculine quirk, but assumptions are always crying out to be unpicked...  Readers are advised to seek The Wire #427 to learn more...

Suffice to say, regular visitors to this blog know that I regularly excavate pre-electronic electro-musical culture.  Many of the late 19th century 'electrical music' performers happened to be fond of detonating small bombs via their electrical instruments - the effect was epitomised by Dot D'Alcorn's and Maud Irving's variety acts.  The bulk of my research on this, drawn from archives of rare materials, was self-published as 'The Magnetic Music of the Spiritual World' (bankrupting me in the process).  That 2015 paperback was intended as a sort of draft to hawk around publishers, and I had hoped - and still hope - that a publisher will take the opportunity engage me to get my original researches on their roster.  I trust it's not excessively vulgar to remind prospective publishers of this work, which is busting for wider aeration... otherwise I may explode from the pressure.