The Wire #364 - and Interestingnesses on the Art of Noises

The latest issue of The Wire (#364) contains my surveyal of the forgotten electro-musical entertainments of the Victorian music halls.  (The electric musical tradition is not to be confused with electronic music, which has different origins, as described in a previous posting).  In the article, the centenary of the Italian Futurists' London debut of the Art of Noises is used as a springboard to examine earlier music hall performers who played advanced forms of 'descriptive' music involving electrical inventions, electric shocks upon members of the audience, imitations of locomotives, storms, battles, etc., and bombastic pronouncements in the stage press.

Whereas Victorian descriptive entertainments sought to simulate recognisable real-world sounds within musical themes, the Futurists radically inverted this: they instead sought to simulate music itself using noises derived from 20th century hubbub - forcibly modulating noises into musical frameworks.  The Art of Noises went way beyond simple imitations of real-world sounds, but nevertheless, superficially it retained 'descriptive' stylings despite efforts to transcend all previous traditions: it can be seen in the titles of the movements, the nods to the noises of urban life, and the provision of programme notes.  Russolo's notes reveal an advanced mode of listening: "my noise spirals are not mere impressionist reproductions of the surrounding life, but synthetically-treated noise emotions.  In listening to the combined and harmonized notes of the Exploders, the Whistlers, and the Gurglers, one scarcely thinks of motor cars, engines, or moving waters, but experiences a great Futurist absolutely unforeseen artistic emotion which resembles nothing but itself".

To shed more light on the Art of Noises concerts at the London Coliseum, I have transcribed here one of the most interesting articles about the event.  This lengthy text appears to have gone uncited in Futurist discussions.  It appears in the July 1914 issue of Musical Opinion, and is written by the editor of that journal, the organist Harvey Grace (1874-1944) under his pseudonym 'Autolycus'.

Accounts of Luigi Russolo's London Coliseum performances are few and far between, and some information appears almost contradictory.  It is reported that Futurist mouthpiece F.T. Marinetti gave a rambling speech in broken English on the first night, whereas other sources - presumably referring to subsequent performances - say that Marinetti had discoursed in Italian and was apparently cut short (see the 1930 autobiography of the manager of the Coliseum, Arthur Croxton, Crowded Nights and Days [Croxton's account is copied in Felix Barker's 1957 The House that Stoll Built]).  The Guardian appears to refer to the second night, reporting that Marinetti was absent, leaving Russolo in charge.  Elsewhere, C.R.W. Nevinson's Paint and Prejudice (1937) mentions that a gramophone playing Elgar accompanied the later performances to allay the heckling crowd. 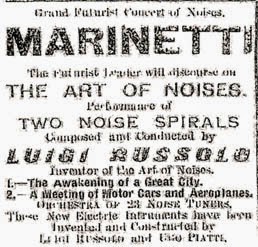 To give some background to these UK performances - it should be said that it was first announced in November 1913 that in a matter of weeks the Futurists "threaten to inflict their music upon us" (the tone of the press was already negative before the first instrument had even touched down in the UK).  One single noise intoner (or, as they were termed at the time - "noise tuner") had a low-key exhibition in London, January 1914 and was said to sound "like a lion roaring".  The Art of Noises was finally debuted at the Coliseum on the week commencing 15th June 1914, and the musicians playing the noise intoners were borrowed from the Coliseum's own in-house orchestra.

Intriguingly, on the 24th June, the Futurists' noise intoners were played at the annual Printer's Pie dinner at the Savoy Hotel, with the noise functioning as a punchline for Hugh Spottiswoode's long, rambling dinner speech (alluding to Marinetti's own rambling introduction to the Art of Noises).  The conductor of the Futurist performance was supposed to be Sir Henry Wood (who had conducted Schoenberg performances earlier that year), but he was unable to attend, so Arthur Croxton - manager of the Coliseum - took his role, and was made-up to look like him by the famous master of disguises Willy Clarkson.  It was a raucous evening with practical jokes, a baby elephant's indiscretion, intonarumori punctuating the speeches, and a boxing match between two characters who were revealed to be illustrators John Hassall and Tony Sarg.

In the light of the reception of the Art of Noises (where the audience supplied its own onslaught of noises) it is interesting to peruse Marinetti's own statements on the music hall - his essay "The Meaning of the Music Hall" published in the Daily Mail in November 1913.

The illustrated transcriptions of Autolycus' musings and Marinetti's variety theatre manifesto are here:
Autolycus on The Art of Noises (1914) [transcribed from Musical Opinion July 1914]
F.T. Marinetti - The Meaning of the Music Hall (1913)
Posted by Daniel R Wilson at 05:58