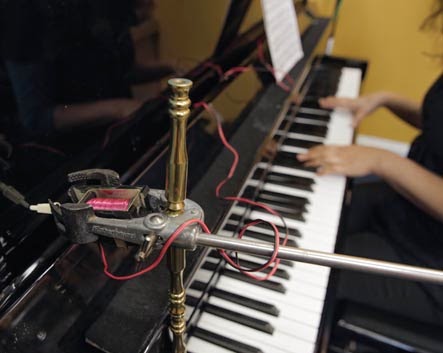 The Wire's website now hosts a short recreation of what is believed to be one of the earliest surviving scores for an electrical instrument.  It is called Clickety-Click and is written by H. F. Juleene (aka John Parsons) - one half of the Victorian electro-musical act Mephisto, starring Dot D'Alcorn: "The Only Lady Electrician in the World".  The piece was published circa 1887.

For the recreation, I built a basic electrical-tapper and foot-switch combo, and Fari Bradley played the piece on Resonance FM's upright piano.  But it should be said that there's no explicit indication that the scored 'click-e-ty-clicks' were specifically intended for an electric adjunct.  However, the evidence strongly suggests it was intended for Mephisto.  (The publication in which it appears - The Musical Million - also published Juleene's The Mephisto Gavotte [referred to in a previous post]). 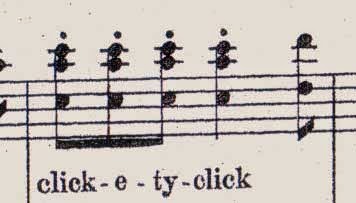 Clickety-Click isn't entirely representative of the electro-musical style.  One imagines that the scoring of its 'electrical' parts suffers from the constraints of traditional notation, and even the melody itself is wrung through the wringer of The Musical Million's popular stylings.  If we examine the score carefully, the actual sound 'click-e-ty-click' savours of an electric button - connected to an electromagnetic percussor - being pushed twice.  The two 'click-...-ty-...' sounds, synchronised with the first and last beats of the beamed three-quaver chords represent the 'on' state: the leading edge of the trigger, whilst the '...-e-...-click' sounds represent the automatic recoil in the 'off' state.

An actual description of the Mephisto entertainment illuminates the extent to which electricity was employed.  (The thematic and technical aspects of Mephisto were based heavily on J.B. Schalkenbach's electro-musical act):

"Bounding about amid flashes of lightning and peals of thunder, she [Dot D'Alcorn] explains how she means to electrify mankind by her magic powers, and how by the mere touch of her fingers on the keys of the organ storms shall rage, cannons roar, birds warble, churches come into view, ships sail, and railway engines their 'daily course of duty' run.  Presently, sitting down at the instrument, the young lady commences a series of operatic airs, sometimes 'pianisimo' and at other times 'organic'.  But the wonder is that as the music proceeds strange effects are produced.  A canary trills forth its accompaniment, a cuckoo calls, drums hidden away somewhere take up the oracle, and dazzling light flashes out for a moment among the audience and is gone before the people can turn round to see 'what's up'.  Castanets suspended in the air keep time to the melody, and an arrangement of cups and saucers half-way down the hall respond to the musical strains.  A cannon suddenly goes off in the gallery, and before the surprise it has evoked disappears the audience notice a miniature church in one corner suddenly lighted up.  Then, with a whistle and a snort, the circular railway sets in motion; a ship above the stage is seen buffeting with the waves, and a lighthouse throws its lurid rays around.  Vivid lights appear in various places, and as suddenly vanish; flashes of lightning cross the hall, a salvo of artillery is given, the rushing sound of a pelting storm can be heard, and, amid a crash, and peal, and flash of fire, 'Mephisto' disappears."
More on this can be found in the current issue of The Wire #364...  Click to Clickety-Click to hear the recreation.
Posted by Daniel R Wilson at 05:18