Clickety-Click update : Plagiarism in the Music-Hall

Of late I've been delving deeper into the overseas exploits of H. F. Juleene and Dot D'Alcorn with their Mephisto electro-musical entertainment.  As stated previously, their Mephisto act was stolen from that of J. B. Schalkenbach, but they toured overseas in places Schalkenbach hadn't set foot.  To its credit, Mephisto attained some originality from Dot D'Alcorn's role as Mephisto's operator; she was described (by Juleene himself) as "the only lady electrician in terrestrial orbit".

Earlier this month The Wire's website hosted a rendition of Juleene's Clickety-Click, performed by Fari Bradley, featuring an electrical clicker built by myself.  The song was published in score form around 1887, and is highly likely to be scored for Mephisto, with the clicks played on an electrical adjunct.

I've made a recent discovery that adds a new dimension to Clickety-Click and demolishes its claims to (musical) originality...

In 1887, Mephisto was touring around the US, playing in Pittsburg, Philadelphia, Chicago and New York.  Incidentally, some curious things happened on this tour - at the Lyceum Theatre in Chicago, June 10th 1887, Mephisto's bare wires were rigged onto chairs to electrically shock the audience at key points during the act.  An old man suffered an injury and sued both Juleene and the management.  Juleene and D'Alcorn saw the potential for publicity in this, and sought to contrive another incident of this sort, which they did later that year at the Brooklyn Theatre by consorting with the management to publicise another - fake - lawsuit. 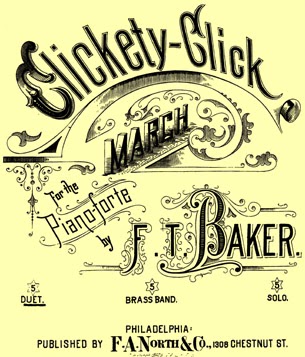 Compared to other acts of the time Mephisto was a novelty, but it remained a rip-off to a gobsmacking extent: Juleene piled audacity upon audacity.  The new discovery concerning Clickety-Click reveals yet more audaciousness.  Whilst in Philadelphia, Juleene was evidently exposed to a very similar song called Clickety-Click March (c.1881) by Fred T. Baker.  Baker's version also featured the "clickety-clicks" written beneath the score, but the piece did not emerge from any electro-musical context.  Juleene appears to have retranscribed it, slightly altered some parts, and stamped his name onto it when it was published as Clickety-Click in The Musical Million (a weekly periodical published by Dot D'Alcorn's father, Henri D'Alcorn), presumably safe in the knowledge that no UK readers would recognise the melody.  Evidence still suggests that the so-called "electrofanatic" Juleene intended the clicks to be played electrically, but this episode highlights the smoke-and-mirrors nature of the music hall - where all is not what it seems, and everything is touched by piracy.

Plagiarism and priority disputes are still a concern today.  This is especially so in electroacoustic music where compositions are characterised less by 'songcraft' and more by basic 'active principles': harnessing natural phenomena where compositions are goaded to emerge almost automatically with minimal composerly intervention.  Such 'active principles' are so elemental that today's electroacoustic composers often clash over things as simple as amplified beetles on tin foil.  Recently, Prof. Nic Collins visited London from Chicago, and as we conversed on this topic in the King's Arms pub, he gave his own perspective.  Many of his students, he said, often proffer ideas that appear to hold new promise, only be told that "Alvin Lucier did that thirty years ago".  Lucier was Collins' former teacher and was composing experimental music throughout the 60s, 70s and 80s that rigorously employed natural acoustic principles.  Indeed, Lucier has perhaps explored all the most elemental 'active principles' for principle-driven electroacoustic musical compositions.  But anyways... More on this anon.... There's no need to be defeatist about the paucity of unexplored 'active principles', as the principles are incredibly variable depending on circumstances and environmental factors, and there is much variety still to be had from things as elemental as, say, feedback... and clicking...
Posted by Daniel R Wilson at 13:26