Working (or not) on a minus budget, and the imminent book of 'Organic Acoustic Modular Synthesisers' 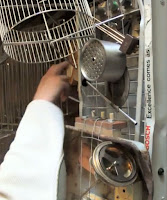 Readers of this blog (if any) will be familiar with its theme of sound-making on a zero budget.  Electronic synthesisers are expensive... Conveniently, physical objects that can mechanically simulate synthesiser processes are not expensive - they're freely discoverable in urban/suburban environments.  Coming to terms with poverty guides all post-electronic music initiative, so it seems gratuitous when a post-electronic aesthetic is adopted by a well-off 'entrepreneur' (urgh), a funded PhD'er', or basically anybody with employment.  Of course, I'm jealous, as I've been angling to earn a living or obtain PhD funding from this idea - which I ascertained to be substantially original - since the dawn of the 21st century, yet others with non-zero budgets are surely better suited to doing stuff with swish electronic gubbins rather than adopting post-electronic contortions?  It seems unnecessary.  I always preface every post-electronic workshop with a warning that post-electronic systems go hand-in-hand with impoverishment, but it's surprising (and teeth-gritting) when some participants go on to later disprove this without me.

Back when I had a working camera and means to upload video, I used to get nice comments on my YouTube channel such as "This is great, may have to try something similar myself!" (that one was from 14 years ago).  More recently, the Oscillatorial Binnage post-electronic 'WokTones' performance video from last year attracted the comment "Amazing and inspiring work! I might pick up a technique or two for my own performances from this clip".  This sort of thing is quite encouraging, but it's rather galling if your meagre income is derived from this stuff; if people keep copying it (albeit divorcing it from the theory and melodrama that spawned it) it diminishes the chances of getting gigs.  This is all part of what I glibly call the Ghazala/Collins paradox: Reed Ghazala, a completely independent figure, pioneered circuit-bending's intuitive rewiring of electronics to produce strange new instruments, whereas Nicolas Collins is academically-rooted, with a methodical approach to hardware hacking, and whose instructional book 'Handmade Electronic Music', published by Routledge explodes the mystique surrounding circuit bending, rigorously surveys the collectives and artists working in this field (including Oscillatorial Binnage!), and heralded Collins' hardware hacking workshops around the world.  Both fascinating and well-established artists.  Apologies to both for this gross oversimplification of their work, but, theoretically, these could be viewed as two distinct approaches that cannot comfortably co-exist - Ghazala almost being a Davenport brother to Collins' J. N. Maskelyne (to use a Victorian magic analogy).  (Discuss[?]).

I never fully appreciated, until now, the possibility of a 'minus budget': a budget of debt.  In the last year or so it's become apparent that there comes a point of resourcelessness where productivity itself is scuppered.  I wrote an article for The Invisible Worker during the first lockdown last year when everyone seemingly went digital: "I was semi-prepared for a post-electronic situation, but completely unprepared for an ultra-electronic one".  The dreaded 'minus budget' eats far beyond a project's boundaries, ultimately jeopardising your living accommodation.  Minus budgets force the discarding of instruments and tools for want of space.

Recently I was forced to jettison many of my more cumbersome creations - over a decade's worth of electromagnetic or hand-cranked acoustic soundmakers once regularly trotted out for gigs or lectures.  With an inkling of their potential awkwardness, in 2005 I'd called these instruments "albatross machines" due to them being so difficult to transport.  Most of these hadn't even been documented properly due to my lack of up-to-date technology, and I relied on people filming my instruments on their phones during live demonstrations, naively assuming that that media would have some permanence (there's an important lesson there).  This reminded me of a poignant project by Imogen Heap and Leafcutter John...

In 2014 musicians Heap and Leafcutter launched a homemade instrument amnesty, requesting submissions of homemade "Musical Creatures" - semi-autonomous soundmaking constructions on the cusp of controllability - whose owners couldn't care for them any more: experiments "gathering dust, sitting on that shelf".  They cited my post-electronic instrument-building work "just to give you an idea of the kind of thing we're after", and provided a link to my blog.  Their project collected all kinds of these "creatures" to perform together.  If only the amnesty was ongoing, my creations would still be alive, AHGHHrg384uvgerjioel!!1

At the time, I wondered about the backstories of the devices that their project sought to rescue.  I couldn't imagine letting my own instruments fall into neglect.  Even my failed apparatuses were kept and tinkered with regularly.  Of course, I didn't reckon with the prospect of a minus budget.

My early stabs at post-electronics saw infusions of air and liquid, or rather syrup, footpumped into vortices between perforated membranes with adjustable tautness.  Wishing for less messy systems, I soon began crowbarring electromagnetism into post-electronic practice.  One abandoned instrument in this direction was too power-hungry to be classed as post-electronic: the electromagnetically levitated xylophone, inspired by the techniques of Eric Laithwaite, whose visionary book 'Propulsion without Wheels' I'd come across many years ago.  Ambitiously, xylophone keys would hover in the air, with theoretically near-infinite sustain.  The space-age ideal was, in practice, a shambolic hotchpotch, as the magnetic levitation field muffled the tones of the keys even when nodally aligned, and the buzz of the greedy coil drivers overwhelmed the xylophone tones.  Any refinements were beyond my budget, and besides, I sensed the instrument would be too gimmicky to offer anything exploratory.  But this led to lamppost resonation and, finally, a passively 'electric' post-electronic solution to completing a real-world analogy of the Attack-Decay-Sustain-Release envelope, so crucial to electronic music. 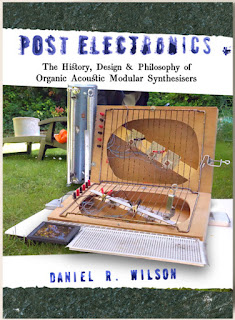 Anticipating the loss of these 'albatross' instruments in 2020, I decided to attempt a documentation of post-electronics' evolution, and a large body of text was rapidly accumulated which has been deemed publishable.  If all goes to plan, this will shortly be purchasable in book form.  The book 'Post-Electronics: The History, Design & Philosophy of Organic Acoustic Modular Synthesisers' memorialises many of the now-discarded instruments, or rather, modules, since the interconnectability of acoustic constructions is a key point.  But the main function of the book is to serve as a detailed guide to electronic-simulating acoustic soundmaking operations.  It also draws parallels with pre-electronics, giving an airing to the dynamics that condemned to obscurity the 19th century electro-musical innovator J. B. Schalkenbach (whose work I've surveyed, being custodian of the Johann Baptist Schalkenbach archive, yet bizarrely no publisher wants to touch), as well as countless old inventions that, undeveloped during their day, now become plausible as post-electronic music mechanisms in the wake of a widened musical consciousness that can reasonably accommodate them.
Posted by Daniel R Wilson at 09:38