Within the expanse of the electromagnetic spectrum is a small band of colour - the human visible light range.  This narrow strip could be viewed as a sort of firewall: above the visible light range lurks dangerous ionising radiations that can mutate organic matter, and below it are the more benign non-ionising radiations facilitating our radio communications amidst thronging natural atmospherics, from the low Schumann resonances of the earth's magnetic field, to the fizz of the sun.

Many radio waves are of natural origin, but since the development of radio technology the possible biological and environmental effects of lower-range non-ionising electromagnetic radio waves have been a source of enduring speculation.  There's still much research to be done to establish the safety of the upper microwave range occupied by radar signals.  5G signals will operate near this range, and the ongoing debates surrounding 5G have reminded me of a song written in 1922 and recorded around 1923, called 'Wireless on the Brain', thus:


Now I'm in my 30s, and my unemployability seems to be fairly well-cemented (at least locally, where I live), I can do things that, when younger, I would've been too shy to do for fear of ridicule.  During the current lockdown I've been exercising, but my belief is that exercise of the voice must accompany that of the body.  So I modulate song onto my breathing.  I run, hop, backtrack, vocalise randomness, gallop sideways, and indulge in all kinds of physical whims, especially around industrial estates, in what I call 'undisciplined exercise'.  If anyone sees me or tells me to vacate the area, I carry on regardless - I simply don't care anymore.  Yesterday I saw some telecom engineers in the distance, which compelled me to start singing 'Wireless on the Brain' (as sung by music-hall comic Ernie Mayne), whilst sprinting sideways, in a circular dance, to the rhythm.  Please, reader, do not think that I'm trivialising a serious matter - I'm just drawing attention to a contested area of thought.  Rather than letting this recalled song nugget go to waste, I thought a blog post on it might be worthwhile.

I can't remember where I first heard 'Wireless on the Brain'.  It may have been taped off the radio.  It appears to be a rare song that hasn't received much attention.  "My wife Jane's got wireless on the brain" runs the chorus - and while it does have some now-un-PC passages that would've been innocent within 1920s vernacular, a malign swipe endures in its cocking-a-snook at Marconi's wireless technology.  Variety performers' livelihoods depended on people going out to music-halls, and so the prospect of audiences staying at home listening to wireless radios was a concern.  Ernie Mayne, aka 'The Simple One', was an effective 'everyman' character to give voice to this wireless cynicism.  (In the vaudeville tradition, Ernie also had an 'everywoman' alter-ego as a vehicle for other songs such as the wartime 'Tale of My Husband's Shirt').

'Wireless on the Brain' isn't actually about the biological effects of radio.  Having something 'on the brain' is likely an early Americanism, noted in Samuel Fallows 1835 'Progressive Dictionary of the English Language' as low slang denoting "an inordinate feeling or desire regarding anything".  Nevertheless, for 1922, 'Wireless on the Brain' is a strikingly visceral title.  The main concern in 'Wireless on the Brain' is that the protagonist husband's wife is too engrossed in listening to the radio to cook his food for him.  A rather antiquated situation.

The title of 'Wireless on the Brain' harks back to another song sung by Ernie Mayne a few years earlier during WWI, 'Farmyard on the Brain'.  Here again, his wife is the affected subject who's working on a farm, and has gone "farmyard barmy" (some extramusical animal imitations underscore this).  Sexist undertones are softened somewhat by the fact that the joke is really on Ernie Mayne, who becomes reduced to a subservient animal state: "if I want a bit of mutton for my supper now, I have to say 'baa baa'".  I can't tell whether the lyrics are all double-entendres - if they are, it conjures deeply unappetising images.  Returning to 'Wireless on the Brain' though... towards the end of the song Ernie is similarly enfeebled, "I tremble like a mouse... for everything is wireless in our house".  Food, incidentally, was a recurring theme for twenty-stone Mayne, whose other hits included 'My Meatless Day', 'There's No Toad in the Toad-in-the-Hole' (both addressing wartime rationing), and 'I've Never Wronged an Onion, Why Should it Make Me Cry?'.

The wife 'Jane' with 'wireless on the brain' hints at a historically obscured female radio listenership, habitually accessing a world of information beyond domestic confines and home literature of the day.  Ernie Mayne's wife wasn't called Jane in real life - she was in fact a performer too, adopting the stagename Alice Davidson (aka Alice Emma Holbrow).  'Wireless on the Brain' was written by one of Ernie's collaborators: a London songwriter called John Patrick Harrington whose wife was named Jane - Jane Eliza Harrington, from Birmingham.  Whether or not the song is a portrayal of their domestic happenings is not known, but happily, Harrington later wrote a gushing poem for his wife on their golden wedding anniversary in 1937. 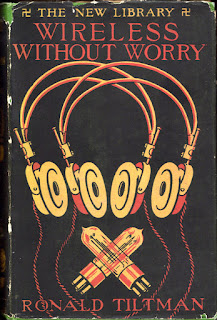 'Video killed the radio star' sang The Buggles in 1979, but in 1922, radio was threatening to kill the music-hall star.  At the age of 58, Harrington was a veteran music-hall writer, and 'Wireless on the Brain' could be seen as a late jibe at the technology that endangered the livelihoods of those struggling to branch out and adapt their established craft to a brand new medium.  With the ongoing debate over 5G, it's worth considering the positions of those extolling its pros and its cons; the cultural tectonics at play.  Like music-hall songwriting in the 1920s, 5G looms over those whose knowledge bases are rooted in older systems.  Wherever there are livelihoods at stake, arguments often throw up unflattering imagery concerning the contested article.  On the other hand, the heavy investments surrounding 5G prompt counterarguments supporting the new wireless technology, yet the proposed wireless ranges are admitted to have a lack of test studies to back up these reassurances.  Video may have killed the radio star, but will radio itself return to kill everyone?  The public are caught between these arguments.  In the meantime, I will continue galloping in circles around industrial estates singing refrains from 'Wireless on the Brain'.

If I ever meet that son of a gun who first invented wireless
I'll kill him, I'll kill him, I'll have his bally gore.
At listening-in my dear old Dutch is absolutely tireless
And when I want to fall asleep and snore
She went and bought a wireless set, and "what a wreck," I feel;
We have a blooming opera now with every blinkin' meal.

My wife Jane, she's got wireless on the brain;
While she's taking messages I send S.O.S.-ages,
Even in my bye-bye, she cries "you lazy T*rk!"
"Can't you hear the wireless? It's time you started work!'

She gabbles about her wireless ways, her aerials and broadcasting.
No error: a terror, my old girl's going to be,
And when I sit down at breakfast time, I've had to sit there fasting
'Cos she, all smiles, is listening-in, you see.
She says "Lloyd George is speaking now,"
Then I shout good and strong:
"'Ere, ain't it nearly time some wireless kippers came along?"

I jolly well wish that missis of mine had never met Marconi,
I'm worried, I'm flurried, I tremble like a mouse.
I'm pretty well near off my filbert, and I'm not so far from stoney,
For everything is wireless in our house.
Our wireless dog keeps barking outside on his wireless chain,
And upstairs in the attic they've had wireless twins again.

My wife Jane she's got wireless on the brain
While she's taking messages, I send S.O.S.-ages
Even in my bye-bye, she's shouting out, "Police!"
"Who's upset the turkey? He's mopping up the grease."
Posted by Daniel R Wilson at 17:21