Joris Van de Moortel's 'A Dubious Pilgrimage', The Wire magazine as a raw material, and a Victorian chemist

Joris Van de Moortel is a Belgian artist whose work is defined by deconstructing the definitions of music and musical instruments.  This deconstruction frequently involves literal wreckage - electric guitars and amps receive special attention.  In the hands of Van de Moortel, these despoliations not mere acts of gratuitousness, a la The Who, Hendrix, et al, but they are ritualised processes to create something afresh from the chaotic debris.  He once stated that after an event, he'd sometimes "bulldoze over the work to then recycle the rubble into new works" - the name Van de Moortel, incidentally, translates as 'cement'.  Whether bulldozers are available or not, physical and conceptual chunks of aggregate from old works often appear in the mortar and masonry of new installations, montage-like.  With his love of sonic frenzy, he was drawn to a recent issue of The Wire magazine themed around musical excess to which I'd contributed a short history of explosives in music.  Van de Moortel made contact with me in August 2019, and engaged me to write a special essay for him, which is now published: "Van de Moortel's Goception in the Mess: Byways in the History of Noise's Ongoing Transmutation into Music" appears in his new artists book 'A Dubious Pilgrimage', published by Hopper and Fuchs in association with Galerie Nathalie Obadia.  More on that shortly (particularly the word 'goception' - which is a made-up word)...

Interestingly, The Wire - a monthly experimental music-focused magazine - is utilised by Van de Moortel as "a note-gathering source, which also becomes a personal jotting pad to pool ideas together".  The Wire's issue #427 on 'excess' inspired Van de Moortel to produce a series of works based on its various essays.  With a nod to the seven sacraments in Catholicism, seven essays were selected from the issue (including my piece, 'Bomb Culture', Tim Rutherford-Johnson's 'High Emission Zone', Alexander Hawkins' 'Written in the Stars', Simon Reynolds' 'Flash of the Axe', Spenser Thomson's 'Crude Awakenings', Greg Tate's 'Clones of Dr. Funkenstein', and David Toop's 'The Sweet Science'), and large scale mixed-media artworks were produced, retaining the essays' original titles.  Closer inspection of these pieces reveals small distressed snippets from the Wire texts pasted within!  Writers, especially in music journalism, seldom consider what their copy might ultimately catalyse when in print form. This thought-provoking transformation of the magazine's texts made me wonder about any precedents where The Wire might've been creatively reworked and personalised in a similar way... Do you know of any, reader?  Rare as it seems, there's one other instance I'm aware of... 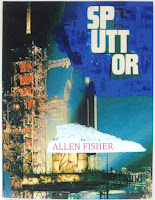 In 2014, the poet Allen Fisher published an art-poetry book titled 'SPUTTOR', containing pasted-in and cut-up texts.  It began as a modified copy of a 1986 book called 'Space Shuttle Story' (all letters other than SP-UTT-OR excised from the cover) by Andrew Wilson (no relation to me).  Allen Fisher had included some lines from my Wire magazine feature on Daphne Oram - 'The Woman from New Atlantis' - from the August 2011 issue.  It's fascinating to find two texts I've supplied for the same magazine ending up as raw material in distinctly different works: Van de Moortel's and Fisher's.  I don't actually write for The Wire very often, so maybe The Wire is funnelled into artwork more often than we might expect?  This also summoned thoughts on whether this is indicative of a specific sensibility that The Wire attracts or fosters.

I've also cut-up a Wire issue or two.  Back in 2001 I was anonymously leaving cassettes of homemade, challenging music in public for random people to find.  MC Schmidt from the duo Matmos was interviewed in The Wire's April 2001 issue, and I'd cut out a quote that'd taken my juvenile mind's fancy: "We couldn't have been more pleased than to have gotten a job making music for gay fisting videos and then talking about it".  I cut out this memorable quote for a palimpsest of juxtaposed matter, photocopied for the cassette's paper sleeve.  In more recent years, the cassette diarist and improviser Adam Bohman sent me one of his personalised diary tapes bearing a collaged cover, and although he'd used a Biro-overlaid baked bean tin label(?) on that occasion, it wouldn't surprise me if Bohman used The Wire as collage material too.  I vaguely remember Bohman's Secluded Bronte bandmate, Richard Thomas (who now contributes to the magazine, on-off) once had some unidentified origami folded from Wire pages prettifying his desk at Resonance FM's old Denmark Street HQ... but it was difficult to tell whether it was a significant objet d'art or not - those were messier times.  I also suspect musical anarchist Xentos 'Fray' Bentos aka Jim Whelton has done something queasily irreverent with The Wire at some point (an artist fond of dressing up as Kaffe Matthews to confusing effect).

To bring this digression to a close, I should return to the made-up word 'goception'.  The word is a clumsy hybrid of the old English "go" and the Latin 'praecipio' ('to command') and signifies a form of chemical reaction, much like the moment when, say, Van de Moortel scrutinises, annotates and cuts-up a physical copy of The Wire - something is catalysed - something is 'gocepted'.  Goception is a word used by an eccentric chemist named John Carrington Sellars in 1873.  Sellars invented it because he was apparently desperate to achieve poetic flow in his oratorial poem 'Chemistianity' published that year.  I found the obscure book in 2013 during my (ongoing) research into electro-musical performer Johann Baptist Schalkenbach, whom Sellars mentions in a key passage on chemistry's role in producing new sounds.  In 'A Dubious Pilgrimage', I examine Sellars' ideas in relation to Joris Van de Moortel's work at the boundary of music and noise, since Sellars, I believe, thoughtfully illustrates the music/noise relationship long before musical modernism.  This is even hinted at too in Sellars' poetic technique: in the preface, Sellars revealed that after contacting a language professor to enquire about the rules of verse, he received the reply: "it is more a matter of ear than of law", and thus Sellars wrote his verses "from sound", with "lines measured according to sound", leading to new words like "goception", and so utterances once dismissible as noise thereby become formalised (in theory).  More on this can be read in the new publication...  To give one final nugget of curiosity, Sellars was best-known at the time for his Patent Cement, synchronicitously tallying up with Van de Moortel's cementitious namesake. 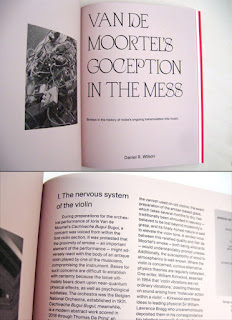 "Van de Moortel's Goception in the Mess: Byways in the History of Noise's Ongoing Transmutation into Music", appears as a chapter in his new fully-illustrated artist's book 'A Dubious Pilgrimage', published by Hopper and Fuchs / Galerie Nathalie Obadia.
Posted by Daniel R Wilson at 18:17