Rose Keen and the Futurists 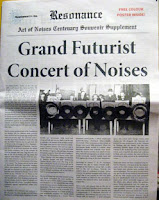 In June last year, myself and Ed Baxter produced the 'Art of Noises Centenary Souvenir Supplement' to accompany two concerts commemorating the Futurist Art of Noises at London's Coliseum in June 1914.  It contained all the most interesting newspaper cuttings relating to the original performances, Harvey Grace's essay, a pull-out colour poster of Russolo's 'Music' (1911), and a short essay I wrote...

During the course of the research for this little essay (which was rather hurried), I discovered one of those Jungian synchronicities that often crop up and cause momentary bogglement.  The Futurists had rather been pipped to the post, as a 'noise concert' of sorts had already taken place just five months earlier in Surrey.  It was the brainchild of Rose Keen (1884-1972), a classically trained musician.  The coincidence is that her birthday happened to be 15th June - the same day that the Futurists commenced their week at the Coliseum!  We may use caution in dubbing Rose Keen Britain's first Futurist, as subsequent research has revealed she did not pursue this particular radical musical approach (becoming a music teacher and concert pianist) but her concert remains an extraordinary feat.  She does not have any living relatives or children, therefore much about her remains unknown.  One possible lead was her former student Katharine Mowll, a pianist and teacher I wrote to earlier this year, only to discover she sadly passed away in July 2014.

What follows below is the full text from the 2014 concert supplement (some parts taken from an older blog posting here).  A much more comprehensive referenced account can be read in my 'Magnetic Music of the Spiritual World' from earlier this year.

------
In Godalming, Surrey, on the 15th June 1884, a girl named Rose Keen was born.  The daughter of a baker father and a confectioner mother, she became a student of the Royal Academy of Music.  At the age of 29, in late December 1913 she organised a daring concert where twenty performers, dressed smartly as servants, played upon pots, pans, kettles, saucers, cups, jugs and other kitchenware.  It was performed on a stage resembling a kitchen, and seems to have met with a positive reception in local newspapers: "the music, though distinctly futurist in idea, was by no means so inharmonious as that which futurist concerts are generally supposed to furnish".  Keen's concert may derive some influence from 'rough music' - the rustic noisemaking tradition of yore - but almost certainly drew upon her culinarily-geared home life.  One can only guess at the challenges she may have faced in pursuing, however briefly it may have been, that particular extramusical avenue.  There are scant reports on Keen's concert, but the few mentions of her "servants' kitchen" appear as a peculiar instance of osmosis: of fractious Italian Futurist sensibilities filtering through the press into light Edwardian cheer.

Keen's concert preceded that of the Futurists by five months, and her deletion to posterity owes much to her not producing enough of the other sort of noise: hype.  The 15th June (coincidentally Rose Keen's birthday) marks the date that the Italian Futurists first brought their Art of Noises to the UK stage in 1914.  F. T. Marinetti - the loudmouth instigator of Futurism - had visited the UK on previous occasions for artistic and poetic emissions, but in the summer of 1914 he brought with him Luigi Russolo, creator of the Art of Noises, and Ugo Piatti, the engineer who helped Russolo build his infamous noise intoners, or, as they were more literally translated from intonarumori at the time, "noise tuners".  The Italians arrived on the wave of Marinetti's thrillingly hyperbolic ventings, which, when played out, seemed to evaporate into guff on exposure to cool English air.  This becomes most apparent in Harvey Grace's 1914 review of the Futurists' Art of Noises at the London Coliseum - published here for the first time in print since 1914.  Reading Grace's remarks, there is a sense of cultures colliding, but not with a bang - incendiary Futurist statements appear instead defused, becoming mere whimsy.

In November 1913, Marinetti had enthused to the UK press: "in a few months, we shall have a full Futurist orchestra ready, composed of innumerable new instruments.  With wood and string and bell and wire we shall at last be able to reproduce the sounds of the modern world."   One single noise intoner had a low-key exhibition in London, January 1914 and was said to sound "like a lion roaring".  As can be seen from the selection of reports collected here, the press was mostly critical of these affronts to traditional music.  The Birmingham Gazette wrote thus: "Those Futurists who find matter for idealism in 'poverty, hunger and dirt' [referencing Thomas Hood's 1843 poem 'The Song of the Shirt' evoking the sounds of arduous toil and its dismal paraphernalia] should be made to save their symphonies for the future when, it is to be hoped, changed conditions will at least lend to their art an archaeological interest".

The Art of Noises was first presented in Milan, then Genoa, in the early months of 1914.  The basic model of a noise intoner featured a string held taut by a movable lever.  The string was attached to a drum membrane that acoustically amplified the sound, which was then directionalised by a funnel.  Like a monstrous hurdy-gurdy, a wheel would spin against the string - vibrating it - when a handle was turned.  Other variations were developments upon this, but are less certain, as designs were never fully disclosed (one report, possibly erroneously, alludes to a bellow-based mechanism).  When the instruments finally arrived in London, some electrical versions had been developed.  The electric varieties were wired in trembling-bell style arrangements, in which a beater would electrically ricochet rapidly back and forth against the string or the drum membrane.

According to painter C. R. W. Nevinson, Marinetti was able to induce Oswald Stoll - manager of the Coliseum variety hall - to play host to the Art of Noises.  "Nobody else could've done it," exclaims Nevinson.  However, Arthur Croxton, the general manager under Stoll, suggests that it was actually he who first drew Stoll's attention to Marinetti, but nevertheless, Croxton was surprised when Stoll decided to engage him.  Croxton alludes to the booking of the Art of Noises as one of the few "mistakes"; the planned second week at the Coliseum was quietly dropped.  In this light of this, it is questionable whether - if the outbreak of war hadn't thrown everything into disarray - the Futurists would have still continued as planned across the UK (there were plans to tour to Liverpool, Dublin, Glasgow, Edinburgh and Vienna  - then Moscow, Berlin and Paris).

Such a new and unusual idea as noise-as-music would have benefitted from a more intimate venue.  Marinetti, staying at the Savoy, had previously given poetry readings at London's Doré Galleries whilst C. R. W. Nevinson banged a drum - these emissions were generally well-received in this cosier environment.  But the choice of the Coliseum for the Art of Noises was a characteristic Marinetti overstatement of grandiosity.  The London Coliseum was one of the finest variety halls in existence - a giant cavernous space.  The comic actor George Graves (who billed alongside the Futurists) described his own performances at the Coliseum as "barking into the chasm".  The overwhelming acoustic depth of the venue contributed to the weakening of the noise intoners' voices, and compelled the music-hall audience to rival, and even surpass, the noise of the instruments in what proved to be rambunctious scenes.

Noise and music had been combined long before the Futurists - it is seen in the 'descriptive' music of the 19th century, where storms, military battles and railways were imitated with special apparatus.  This was given an ultra-modern spin by the electro-musical entertainments of the late 19th century music hall, pioneered by J. B. Schalkenbach.  Such acts featured thematic noise effects electrically triggered, with the effects often placed within the audience space.  These antecedents had the noises ensconced within musical arrangements, and thus made palatable.  Russolo, on the other hand, radically forced unmusical sound into musical frameworks, modulating noise to musical ends using new instruments.  Russolo's Art of Noises went beyond simple imitations of real-world sounds; his notes reveal an advanced mode of listening: "my noise spirals are not mere impressionist reproductions of the surrounding life, but synthetically-treated noise emotions.  In listening to the combined and harmonized notes of the Exploders, the Whistlers, and the Gurglers, one scarcely thinks of motor cars, engines, or moving waters, but experiences a great Futurist absolutely unforeseen artistic emotion which resembles nothing but itself". 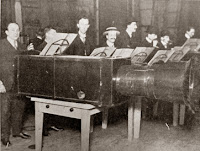 The players of the noise intoners were drawn from the Coliseum's own in-house pit orchestra who were initially reluctant to cooperate.  There was a perceived ridiculousness to the endeavour, and only when this comic aspect dawned on them, according to Arthur Croxton, did they become more open to the idea.  The players performed scores Russolo had prepared: 'Awakening of a Great City' and 'A Meeting of Motor Cars and Aeroplanes', notated using drum scores, but according to Croxton, the players did not pay any attention to the score, acting instead upon Russolo's conducting gestures, thus adding an (unwarranted) element of improvisation that, with hindsight, serves to heighten the revolutionary aspect.

The Art of Noises' week commenced on the 15th June, billed with comedians, vocalists, actors, acrobats, and short films.  The Futurists' turn was met with heckling, booing, hissing, animal noises and indelicate commentary, until one night Oswald Stoll persuaded Marinetti and Russolo to incorporate a gramophone record by Elgar into the act, which quietened the audience a little.  It is reported that Marinetti gave a rambling speech in broken English on the first night, whereas other sources - presumably referring to subsequent performances - say that Marinetti had discoursed in Italian and was apparently cut short.  The Manchester Guardian appears to refer to the second night, reporting that Marinetti was absent, leaving Russolo in charge.

On the 24th June, the Futurists' noise intoners were played at the annual Printer's Pie dinner at the Savoy Hotel, with the noise functioning as a punchline for Hugh Spottiswoode's long, rambling dinner speech (alluding to Marinetti's own rambling introduction to the Art of Noises).  Printer's Pie was a magazine published to raise money for a printers' charity.  The conductor of the Printer's Pie Futurist performance was supposed to be Sir Henry Wood (who had conducted Schoenberg performances earlier in 1914), but he was unable to attend, so Arthur Croxton took his role, and was made-up to look like him by the famous master of disguises Willy Clarkson.  It was a raucous evening with practical jokes, a baby elephant's indiscretion, intonarumori punctuating the speeches, and a boxing match between two characters who were revealed to be illustrators John Hassall and Tony Sarg.   It is not known if Russolo, Marinetti or Piatti were present, but it is said that the instruments were pelted off-stage after just a couple of minutes by the tipsy, raucous audience.   The Printer's Pie noise intoner performance places the noise intoners in a comedic context, and also gives much food for thought on the diverse dimensions of The Art of Noises.   A hundred years later, introducing two special concerts marking the events of 1914, Resonance 104.4FM's Ed Baxter identifies some of them: "an unparalleled iconoclastic act, an elaborately tedious joke, a reactionary act of cultural vandalism, a classic 20th century avant-garde gambit, a myopic aesthetic dead end, the last word in Italian organ grinding, the irrefutable foundation stone of contemporary sonic art, the worst variety act in history... or perhaps the most important concert of all time".
Posted by Daniel R Wilson at 05:02